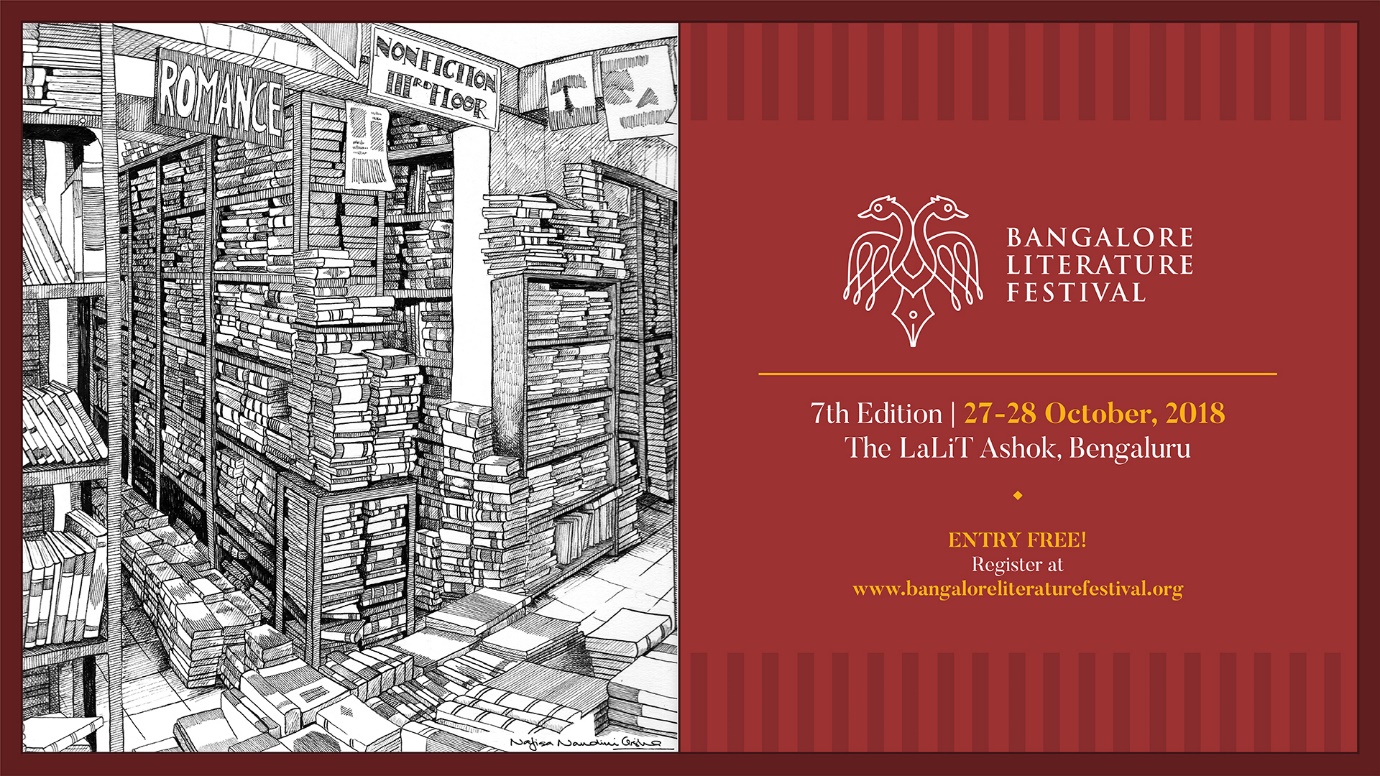 The Bangalore Literature Festival remains among the most sought after and must-attend event for readers and writers from Bangalore, India and the world, with its stimulating panel discussions, interviews and literary sessions. As in the past, this year too the Festival will witness authors engaging the audiences with diverse themes. Highlights include “The Indian Road to Equality”, “Love and Longing in Hindustan”, #MeToo Comes to Town, “Telling a Story, Shaping the World”, “Editor’s Cut: Road to 2019”, “Ode to Southern Poets”, Looking Beyond 377 “Outside Looking In: Eyes on India”, “Questioning the Foundations of the Indian Republic”, “Crossing to Hampi: A Dramatic Exploration of the Vijayanagara Catastrophe” along with conversations on fashion, fake news, feminism, crime, political cartooning, popular science, wildlife, graphic novels, literary fiction, narrative non-fiction, memoirs, poetry and a lot more.

A few firsts that the Bangalore Literature Festival is proud to offer to our city at this edition of the Festival are:

2. Agatha Christie, Poirot and Me with Sophie Hannah – Internationally bestselling writer of psychological crime fiction and who writes new Hercule Poirot novels with the blessings of Agatha Christie’s family and estate.

3. Descent of Man with Vijay Seshadri – Pulitzer Prize winning poet and has been an editor at The New Yorker, as well as an essayist and book reviewer in The New Yorker, The New York Times Book Review and various literary quarterlies.

4. Child Star to Her Own Woman with Sarika – An acclaimed actor, she started her career at the age of four and has acted in films spanning diverse genres and chosen to go beyond into costume design, sound design and film production, winning critical acclaim and National Awards.

This year the Bangalore Literature Festival has doubled the children’s programming to include two forums – for children (4-10) and young adults (11-15) – on both days of the Festival and an exclusive bookstore for children. Titled ‘Children|Literature|Fun – C|L|F’ this includes writing workshops, RJ’ing, illustration, storytelling, creative games, magic shows all in a carnival atmosphere. Some of the exciting elements of C|L|F this year are sessions with authors including Anushka Ravishankar, Paro Anand, Aparna Jain, Poile Sengupta, Santhini Govindan, Stephen Alter, Anita Vachcharajani, Asha Nehemiah, Kartik Shanker, RJ Jimmy Xavier, music education sessions with Saskia Rao de Haas, Lithuanian illustrator and storyteller duo Evelina Daciūtė and Aušra Kiudulaitė, on being a stand-up comedian with Karthik and a whole host of other fun and exciting programming. Painstakingly curated by Vikram Sridhar, this promises to take not just children but the little kid in every adult too by storm.

The Bangalore Literature Festival and Atta Galatta, the city-based bookstore and art-literature space, will also give out the Atta Galatta–Bangalore Literature Festival Book Prize to honour the best of English and Kannada writing. There will also be a session in partnership with the The New India Foundation for the Kamaladevi Chattopadhyay NIF Book Prize for the best non-fiction book on modern / contemporary India.

Festival Director Shinie Antony says, “Bringing you writers from everywhere, the Festival addresses burning issues like #MeToo, fake news, gender equality, Sec 377 this year. Young voices, in particular, are in focus, along with beloved ones we never tire of hearing.”

The Festival will be anchored by the city’s much-loved radio personalities Sriram Sullia and Darius Sunawala.

Brought to you by Friends of BLF – a group of eminent citizens of Bengaluru, who firmly believe that the city comes alive in its public spaces, in its arts and culture events that foster meaningful dialogue, enriching discussions and healthy debates; a group whose support has laid the foundation for an independent, community-funded literary event that the city can be proud of. Friends of BLF help create – with their generosity, energy and time – this world of words.

The Festival opens at 10 am on Oct 27 and Oct 28. Entry is free, open to all and registration is recommended to get festival updates.