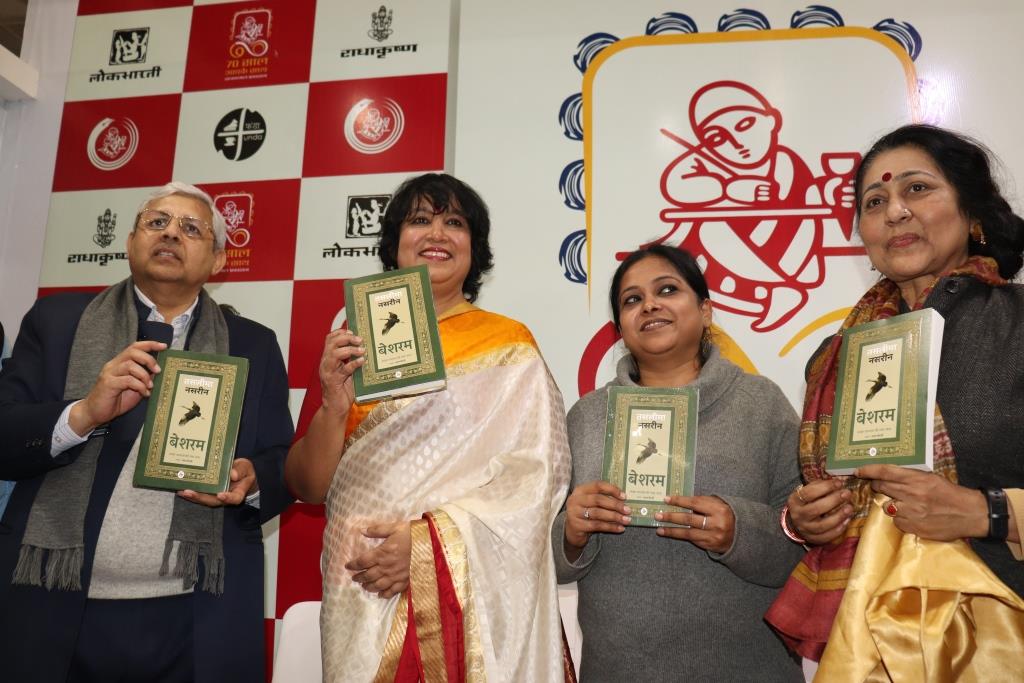 New Delhi: In Asia’s largest book fair, author Taslima Nasrin’s launched ‘Besharam’ her sequel to the notable book ‘Lajja’ in Hindi at Rajkamal Prakashan’s Jalsaghar. Apart from Taslima Nasrin, Ashok Maheshwari, the MD of Rajkamal Prakashan and author Alpana Mishra, Dastango Himanshu Bajpai were present during the unveiling of the book. Taslima was in conversation with the senior journalist Manisha Pandey during this event. This novel has been translated from Bengali to Hindi by Utpal Banarjee.

The book “Lajja” revolves around the Hindu families who had to leave Bangladesh and seek exile in India because of the religious violence caused in the country. It caused a lot of political tension in the country which forced Taslima to leave Bangladesh. Besharam, portrays the aftermath life of Suranjan, Maya and her parents after leaving Bangladesh and how it impacted their lives. “This is not a political story but a social story about their lives, families and relationships”, Taslima added. She further added, “I could visualize myself in this novel as I was living in Calcutta while writing this book.”

Sharing her personal experience about the exile, Taslima confessed that, people who migrated from Bangladesh to India still have the opportunity to back to their country, but I do not have that opportunity. After writing ‘Lajja’ I was banned by the Bangladeshi government. My suffering is different from the people who can visit, but there is no compensation or comparison for any suffering.

Expressing her opinions about the situation in Bangladesh she said “the intellectuals who raise their voices and started writing like me are being killed by terrorist or religious fanatics. Others were not expressing their views because they were scared. The problem is the Bangladeshi government and its support from religious organizations which makes it difficult to raise your voice.”

She also expressed her love for India. She said that, “I have the opportunity to live in Sweden and America, but I still chose to stay in India as it looks like my country and because of the solidarity, love and respect I receive from most of the Indians.” I love India and also speak one of the Indian languages. My father and grandfather were Indians, the only reason why I am not an Indian is because of the partition. Dastango Himanshu Bajpai read an excerpt from ‘Besharam’