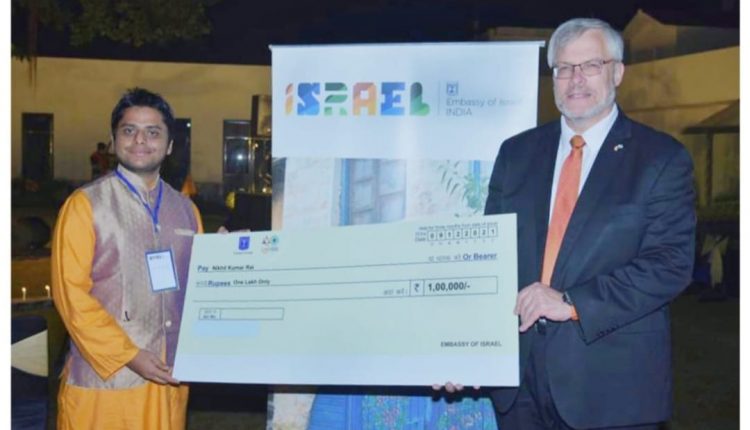 VARANASI : Banaras Hindu University, fondly and popularly known as the capital of knowledge, established by Mahamana Pt. Madan Mohan Malaviya Ji, is beaming with pride with a shining achievement of one of its brilliant alumnus Nikhil Kumar Rai. Nikhil, who is a pass out from Bachelor in Applied Arts from Faculty of Visual Arts in BHU, has brought further laurels for the university. A logo unveiled by Indian Ambassador Sanjeev Singla and Israeli Envoy Naor Gilon on Monday, 24th January, 2022, for the celebrations to mark establishment of 30 years of diplomatic ties between the two nations, has been designed by Nikhil. Nikhil has been a gold medalist from BHU. He had completed his graduation from Banaras Hindu University in the year 2020. Currently he is pursuing his PG from NID Ahmedabad. Nikhil today visited his alma mater and department of applied arts and sought blessings of his teachers. Nikhil has won a cash prize of Rs. one lakh for the design of the logo.

May 17, 2022
The Logo features the Star of David and the Ashoka Chakra- the two symbols that adorn the national flags of both countries- and forms the numeral 30 depicting the 30th anniversary of bilateral relations. This special logo symbolizes the strong friendship, love and admiration that exist between the people of the two nations.
Dean Faculty of Visual Arts Congratulates Nikhil
Prof. Hira Lal Prajapati, Dean, Faculty of Visual Arts, has congratulated Nikhil for this major feat. He said that though Covid19 pandemic has posed many unprecedented challenges before us, the very talented students of the faculty have continued to make the institution proud.
Share FacebookTwitterGoogle+ReddItWhatsAppPinterestEmail