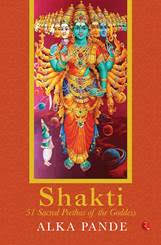 ABOUT THE BOOK
This book is devoted to the understanding of the omnipresent and all-powerful Shakti and her sacred abodes known as Peethas.

The story of Devi Sati and Lord Shiva ended tragically with the death of Sati. An angry and inconsolable Shiva took Sati’s lifeless body and started the ‘Rudra Tandava’ or the dance of destruction. To save the world, Lord Vishnu used his ‘sudarshan chakra’ to cut the body of Sati into 51 pieces and each part fell at different places on Earth and each become a revered Shakti Peetha.

Renowned writer and historian Dr Alka Pande narrates that while the Shakti Peethas represent a single philosophical fold, they are a testament to the diverse legends of Shakti. Different peethas which became holy at the touch of Sati’s body have survived hundreds of centuries and have kept alive their local folklore of Shakti. Together they evoke the Mother Goddess as both the nourishing and the destructive force behind the existence of the cosmos.

The 51 Peethas featured in the book can never be an absolute representation of the Peethas of the Goddess, since the Devi is anywhere and everywhere.

Ek Nadir Roznamcha: Glancing through an Important Page in…

DR ALKA PANDE is one of India’s leading authors, art historians and curators. Some of her prominent books are Body Sutra: Tracing the human form through art & imagination, Ardhanarishvara, the Androgyne: Probing the Gender Within; The New Age Kamasutra for Women; and Shringara: The Many faces of Indian Beauty. Dr Pande is currently the consultant art advisor and curator of the Visual Arts Gallery at the India Habitat Centre in New Delhi.

Book : SHAKTI: 51 Sacred Peethas of the Goddess by Alka Pande