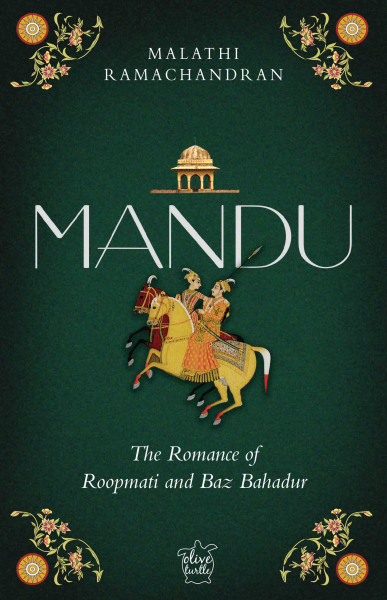 Book Review: Mandu – The Romance of Roopmati and Baz Bahadur by Malathi Ramachandran

“Words are pretext. It is the inner bond that draws one person to another not words”. — Rumi

Mandu is a perfect mixture of historical tale and fiction as perceived by the author Malathi Ramachandran.  The book is a glimmering imagination and magnificence materialised on paper. As an author she has been immensely successful in portraying the historical city Mandu of Malwa region, with all its grandeur and lifestyle. The architecture of forts, the greenery of the city, river Narmada, and the background of the story has been very well described in the book.

The story is about young sultan Baz Bahadur and peasant girl Roopmati who works as musicians in his court. Her passion for music attracts Baz Bahadur and he falls in love with her going against the will of his mother and wife. There is romance, drama and an impending war by the Mughals on the kingdom of Sultan which threatens to rip apart the soulmates.

Will Sultan Baz Bahadur manage to save his kingdom and love of his life?

You are in for a historical journey of love and war. Author here has explored the initial take with perspectives of all the main characters from a third person point of view.

Set in 16th century India, this novel is inspired by the legend of the young sultan, Baz Bahadur, and the beautiful peasant girl, Roopmati, who come together over their common love for classical music. He is a man who can have any woman, and she is a woman too proud to ever be part of his harem.

When Baz Bahadur was out on a hunting expedition, the voice of a maiden caught his attention. Almost instantly he too begins singing with the young woman who appears to be immersed in the song, her eyes tightly shut.

It is only after the song ends that she realises his presence and invites him home for a cup of tea. Baz, who first noticed her voice, is taken aback by the beauty that she possesses and concludes how she couldn’t have had a better name, “Roopmati”. He is immediately filled with the desire to take her to the palace where she would be his muse, fellow artist to whom he can read poems to and sing songs with. Roopmati, who shares a particularly close bond with the river Narmada, agrees to accompany him on the condition that she has to be able to see the river from the palace. And so, the relationship between Baz and Roopmati unfurls like a blooming flower.

But night after night, as they sing together in the enchanting world of Mandu, the fortress city lit up with lanterns and throbbing to the beat of ghungroos and tablas, a magic begins to happen. Baz and Roopmati fall in love. But, far away, in Agra, the Mughal Emperor, Akbar, is planning his campaigns and Mandu has been pinned on his map as a kingdom to be captured.

Will Baz be able to protect his capital, and more importantly, the woman he loves, from the enemy forces?

he author has beautifully painted this love story and brought famous Indian folk tales to life, as well as the independent character of ‘Roopmati’.  Baz Bahadur and Roopmati’s romance stands the test of time and enemies abound, and that’s quite inspiring.

Malathi Ramachandran has delivered this masterpiece that will make you imbibe history and power and encompass it within yourself as sometimes very ancient yet recent, mysterious and shimmery and yet so well understood specifically in the attributes portrayed by Roopmati.

The book hasn’t shattered the boundaries between what is real and what could be real, the story is so gripping that one would not forget to assume it real at that very moment given the fact that every expression is relevant to love within ourselves and this particular characteristic is bestowed upon Roopmati and her passion for Indian classical music.

Malthi has swirled various colours and tinges of love, romance, exuberance and shadiness attached to it without any cease, to give you a book that makes you question the contrast between suggestions and resolutions. Roopmati’s passion and aura made Baz Bahadur think out of his wits and despite of his mother and his Begum being reluctant to the relationship, still they have found the world within each other. Overcoming all the plots of jealousy, revenge and regret, they come out strong in the most unexpected of ways especially when Emperor Akbar is also pacified with Roopmati’s talent. ⁣

The author has done a great job in character development of both the protagonist. The soulmates, Roopmati and Baz Bahadur and their twisted tale of ancient yet sensual romance made the plot intriguing enough to let the readers want more and more of it. The story has been very well laid out with events unfolding in line with the plot. It is well paced and there is no rush. The language of the book is lucid and simple. The cover of the book is beautiful. It depicts historical drama which is in line with the plot.

I kept on imagining her writing style as a vast galaxy of the Mandu’s world, its acquaintances, and situations and surmounts of ancient aura to it giving it an exemplary show. The poems in between are a bonus for classical music and poetry lovers.
⁣
There were some parts that could’ve been better. There is a mention of a dwarf and an eunuch and the description seemed very stereotypical.

History is witness to the immortal love of Baz Bahadur and Roopmati.  The author makes us realise that the only way to know and experience an entity is through stories – large and small, mundane or essential, real or fantasy. With prose as stunning as the story itself, the author paints an epoch often told but scarcely written.  Highly recommended for historical, love and fictional story lovers!

iednewsdesk Jan 29, 2022
In a new study, participants underwent an intense bout of exercise after both normal sleep and after three nights…