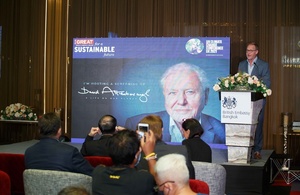 A hope for the better future: British Embassy Bangkok, in conjunction with ICONSIAM and Major Group hosted the screening of Sir David Attenborough’s latest documentary ‘A Life on Our Planet’

“What will our world be like in the next 100 years?” To answer this question, we might need to look into our past.

66 years ago, ‘Zoo Quest’ was first aired on BBC on the 21st of December 1954. The documentary, presented by 28-year old David Attenborough, showed the world the wonders of the earth. The world saw, for the first time, marvellous creatures living in undiscovered landscapes and hidden oceans through the eyes and words of the 28-year old storyteller.

Today, now aged in his 90s and with a knighthood title, brimming with experience as earth’s adventurer and nature’s storyteller, Sir David Attenborough stands by his chosen path as a naturalist. Throughout the past half-century of his career, he continues to speak for the planet, raising awareness of preserving wildlife, and over the past 20 years, has been an avid speaker for climate change.

His latest documentary, ‘A Life on Our Planet’ highlights the problem the world is facing at an alarming rate as a result of human-induced climate change. He posits that continuing on our current paths of consumption and fossil fuel use would lead to devastating outcomes for humanity. The documentary presents, through his ‘witness statement’, a crossroads between the ‘destruction’ that is dawning upon us in a period shorter than a lifetime, and a glimpse of ‘hope’ that we all can still save ‘our planet’, which is home to all of humanity and life on earth.

The United Kingdom (UK) will host the United Nations Climate Change Conference (COP26) in November 2021. As such, the British Embassy Bangkok, in conjunction with ICONSIAM and Major Group, proudly hosted the Screening of Sir David Attenborough’s latest documentary ‘A Life on Our Planet’ at ICON Cineconic, ICONSIAM on 30th November 2020.

The event forwarded the goal of COP26 which is to unite the world on a path to a zero carbon economy as we build back greener from COVID-19. It featured activities consistent with COP26 campaigns, namely showcasing of British products that are at the heart of driving a transition to low-carbon energy and a panel discussion about nature-based solutions to climate change.

Solutions mentioned include dealing with ‘Ghost nets’ in the ocean to save wild ocean life; exploring how communities and groups are using nature-based solutions to save the environment by cutting food waste and monitoring and reducing ocean carbon levels; and how local communities can help address climate change by maintaining natural mangrove forests.

Energy Transition
In the post-event online survey, the crowd was asked ‘Which policy should governments focus on to solve Climate Change?” Interestingly, “Energy Efficiency” is the most mentioned key word followed by “Improving Public Transport”.

The results reflect the fact that ‘Energy’ and ‘Transport’ are two things people experience in their daily lives and felt it would make a significant impact if technology was utilised to ensure these areas of urban living are environmentally friendly.

Through partnership with the UK’s Department for International Trade, 5 British companies have showcased their technologies at the event including:

Ride-hailing Platform from evRiderz, world’s first Triple Play ride hailing company, provides Electric Motorbikes to its drivers and aims to gradually transition drivers and users to Electric Vehicles (EVs). The platform was recently launched in Thailand, early in November. The App “evRiderz” can be downloaded from Apple & Google Play Store.

Kinetic Tiles from Pavegen which converts kinetic energy into electricity, providing businesses equipped with the tiles with insights and incentives that rewards positive customer experience.

Easson Energy provide Energy Efficiency Solutions which incorporate cutting edge technologies such as AI, SaaS and IoTs to give users granular, asset level, real time control of their energy usage helping users save as much as 40% of their electricity bills whilst simultaneously reducing energy usage and carbon footprint.

Ricardo is a global, multi-industry, multi-discipline consultancy supporting the transport, energy and environment sectors. Examples of their multi-industry knowledge and deep technical expertise – developing electric vehicle technologies including batteries and motors, innovating emission reduction solutions for marine and off highway sectors and guiding government and industry on targets and obligations. They are uniquely positioned to handle their clients’ toughest challenges regarding carbon emissions and climate change.

Make change a choice not a consequence
But there is still hope, among the alarming facts about climate change and the scientific data warning us that if we do not take an ambitious climate action before the turn of the decade, nature could be irreversibly ruined, and with it the human livelihood. There is still hope, even as the clock is ticking away. Opinions from the post-event online survey and Attenborough’s message from the movie itself suggest that there is much more we can do. Besides the actions to be taken by governments, the private sector, and we as individuals, have a crucial role in making changes to save nature now. Because by taking climate actions we are saving not only mother earth but also the future of our own humankind.