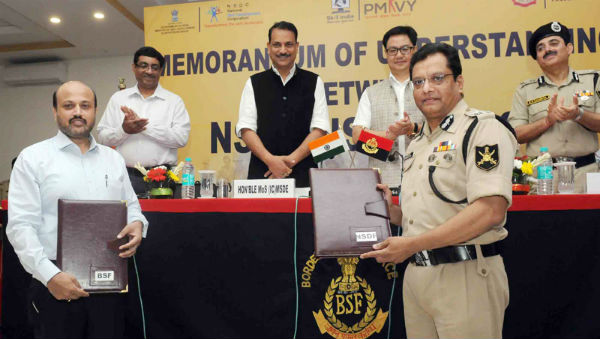 BSF signed an MoU with the National Skill Development Corporation

New Delhi: The Border Security Force (BSF) signed an MoU with the National Skill Development Corporation (NSDC) here today in the presence of MoS (Independent Charge) Skill Development and Entrepreneurship (MSDE), Shri Rajiv Pratap Rudy and Minister of State for Home Affairs, Shri Kiren Rijiju. The MoU will enable NSDC to provide “Skill training to retired and retiring BSF personnel, as well as to the population residing in the border areas.

Speaking on the occasion, Shri Rudy said Skill Development remained an ignored aspect until the Prime Minister Shri Narendra Modi created the Ministry of Skill Development and Entrepreneurship two and a half years ago, soon after the NDA Government came to power. Suffering from colonial legacy, Skill Development remained a neglected sector while the Human Resource Development focus remained confined to imparting academic education, Shri Rudy said. Industrial Training Institutes (ITIs) came to be regulated by the National Council for Vocational Training, an advisory body set up by the Government of India in the year 1956, and today the ITIs cater to around 23 lakh students at any point of time, he said. But this alone is not sufficient and there is much more demand for skilled workforce that the NSDC aims to bridge, he added.

Following are the objectives of the MoU:

(a) To contribute to the Skill Development Agenda of the country by ensuring the successful roll out of NSQF (National Skill Qualification Framework) based skill training to the retiring or retired BSF personnel and local population at the area of deployment through NSQF compliant training programmes at multi-skill development centres run by BSF. This will help in meeting the aspirations of the stakeholders for training and employment.

(b) This collaboration aims to train and provide gainful employment to retired BSF personnel and their families, school students, youth, differently abled for five years starting from April 2017 to April 2022.

(c) The project will be of a limited time period i.e. (5 years) and in mission mode. As such, the curriculum development and capacity building will be encouraged to enable the model to be self-sustaining over time.

(d) The programme will be appropriately named keeping the objectives in view and will have BSF co-branding with Skill India and NSDC.

‘We Are Water Foundation’ launched in India