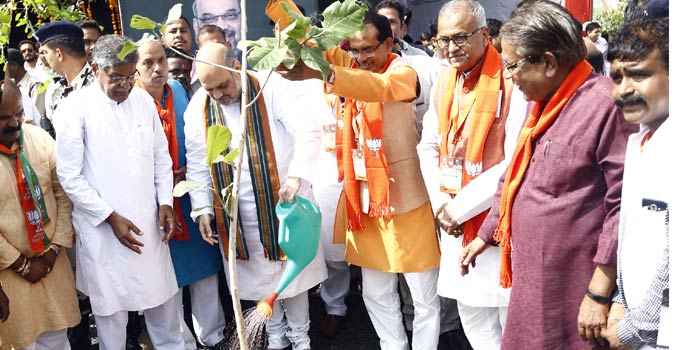 Bhopal : Chief Minister Shri Shivraj Singh Chouhan called upon the youths to come forward to make the state the best and India a Vishwaguru. He urged them to be committed towards social service. Government will not let the talent of youths go waste and will help them in every possible way to fulfil their dreams. BJP National President and MP Shri Amit Shah said that the youths are responsible for building a new India. Government is doing the work of providing opportunities to the youth. He was addressing the gathering here today as the chief guest at a ceremony organised for distribution of Mukhya Mantri Medhavi Vidyarthi Yojana certificates to the beneficiaries.

Student Welfare Fund to be constituted

Chief Minister Shri Shivraj Singh Chouhan said that the resolve to give wings to talents is being fulfilled today. He said that despite children having the talent, capacity and qualification, they were unable to acquire higher education due to their poor financial condition. To fulfil the dreams of these children, the Mukhya Mantri Medhavi Vidyarthi Yojana was launched. The children can now reap benefits from the scheme and bring laurels to their family, state and country. The Chief Minister said that the Student Welfare Fund will be constituted to provide assistance to the financially weak students. Students who have got a job after taking the benefit of Mukhya Mantri Medhavi Vidyarthi Yojana will help in this fund. Similarly, students who have got admission in Medical College, will complete their education and will provide their services rural areas for three years. The Chief Minister also administered the oath to students who wish to pursue engineering to complete their education and work honestly.

India moving ahead to become a Vishwaguru under PM’s leadership

The Chief Minister said that India has gained in respect, honour and self-respect in the whole world under Prime Minister Shri Narendra Modi’s leadership. Respect for him is respecting all Indians. He finished the situation of Policy Paralysis. He has taken several steps for the betterment of youths which is making India proud. He said that under Shri Modi’s leadership, India is emerging in the role of a Vishwaguru to show the path of eternal peace to a world burning in the fire of materialism.

The Chief Minister said that the life of youths has to be made better for the all round development of the state. For this, Madhya Pradesh government is providing free textbooks, cycles and uniforms to students. Scholarships are being provided to financial weak students belonging to general category also apart from the weaker sections. While girls are being provided with the benefits of Gaon ki Beti and Pratibha Kiran Yojana, students securing more than 85 per cent will be given laptops and smart phone will be distributed to such students who are taking admission in colleges.

Chief Minister Shri Chouhan said that only government jobs are not the way to employment. Youths are now taking the benefits of Skill India, Start up, Standup India and Madhya Pradesh government’s Mukhya Mantri Yuva Udyami Yojana, Mukhya Mantri Yuva Swarozgar and Contractor Yojana for self-employment so that they become capable of providing employment to other youths. State government is undertaking significant work to promote skill enhancement. A global skill park is being developed with the help of Singapore through 10,000 youths will be trained simultaneously. ITI is being upgraded. The Chief Minister administered the oath to plant saplings for environment conservation, create a society free of intoxicants and consider girls and boys equal. He said that Prime Minister Shri Modi’s dreams will be realised in Madhya Pradesh.

Shri Modi has made the job seeker a job creator

University of Warwick: More than one in five top earning…

MP and BJP National president Shri Amit Shah said that youths will play a major role in building a new India. Prime Minister Shri Modi has given the opportunity to the youths to discover new possibilities and implement new thoughts through various innovative schemes.

He has called upon the youths to be committed towards serving the poor as they have got a platform for development by the government. Shri Modi has assisted youths in realising their dreams with the belief that their development is the state and country’s progress. Programmes like Digital India, Mudra Bank, Startup and Skill India have made the youths ‘job creators from job seekers’. His government has been doing the work of changing the pace of development in the last three years. The paralytic Indian economy of yesterday is today a respectable position and the world’s fastest developing economy.

State’s development most talked about in the world

Shri Shah said that it is the government’s responsibility to help financially weak families. Financial problems lead to frustration and injustice in the society. The Medhavi Vidyarthi Yojana is proving to be a big possibility in the efforts towards social justice. There is a breath of fresh air in the lives of talented students who have benefitted from the scheme which will take them to new heights. He said that only a sensitive person like Chief Minister Shri Chouhan can take such an initiative. The development of Madhya Pradesh under his leadership is a topic for discussion in the world. He has worked towards all round development of the state by launching schemes, implementing it and taking its benefits to the whole society. Known as a bimaru state, Madhya Pradesh is today in the list of best states.

In his welcome address, Minister of State for Technical Education Shri Deepak Joshi said that state government is making efforts to fulfil the target of education to all. Making a mention of Garib Kalyan Varsh, he said that the yojana is an effective step in this direction and gave brief information about the scheme. Principal Secretary technical Education Shri Sanjay Bandopadhyaya proposed the vote of thanks.

New hopes and enthusiasm in students

The guests inaugurated the programme by lighting the lamp at the outset. The guests were welcomed with books.

University of Warwick: More than one in five top earning bankers has benefited from…

iednewsdesk Apr 7, 2022
New scientific analysis of the composition of Roman denarii has brought fresh understanding to a financial crisis…