Speaking on the occasion, the President said that the visit to Leh, in the State of Jammu and Kashmir, was his first outside Delhi since assuming office. In his capacity as Supreme Commander of the Armed Forces, he dedicated the visit to the armed forces of the country.

The President said it has been 54 years since the Ladakh Scouts became part of the Indian Army. This period has been replete with tales of heroism, honour and glory. The genesis of the Regiment was in the invasion by Pakistani raiders in 1947-48 and the resolve with which Ladakhis defended their motherland. This continues to remain a matter of pride for the entire country. 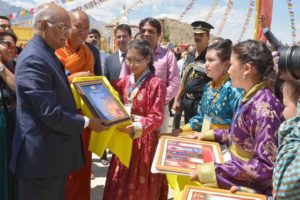 The President said that in a little over half a century, the Regiment has earned 605 Honours and Awards for conspicuous gallantry and distinguished service. This speaks for the exceptional valour and spirit of the Regiment personnel and is a model for all soldiers and officers of our armed forces. They have earned distinction in various wars and operations and excelled in sports, adventure pursuits and professional challenges.

The President said that at the Colour Presentation Ceremony, he would like to pay homage to the martyrs of the Ladakh Scouts Regiment. Their blood and sacrifice has secured our sovereignty, brought glory to our nation and protected our people from harm. He also congratulated all veterans and serving soldiers of the Regiment for their adherence to duty and professional conduct. Among the dignitaries present on the occasion were the Governor of Jammu & Kashmir Mr. N.N. Vohra, Chief Minister Ms. Mehbooba Mufti Sayeed, Deputy C.M. Mr. Nirmal Kumar Singh, other Ministers of the Government of Jammu & Kashmir, as well as Chief of Army Staff General Bipin Rawat.

Later the President laid the foundation stone of the Buddha Park for World Peace at Leh’s Mahabodhi International Meditation Centre. Thereafter he flew back to Delhi.

Govt to come up with Digital University frameworks to facilitate workforce:…