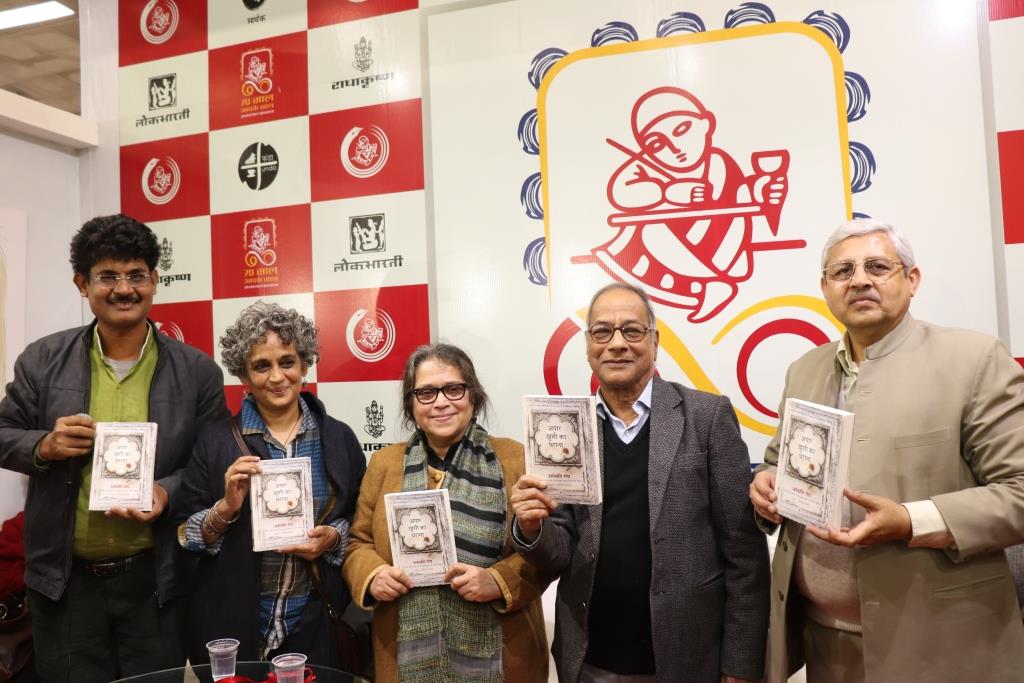 “To call me an activist is to reduce what activist do, and what writers do”, Arundhati Roy

New Delhi: The 5th day of the 27th edition of the World Book Fair been held at Pragati Maidan witnessed the famous writer Arundhati Roy at Rajkamal Prakashan’s stall Jalsa Ghar. The Man Booker Prize winner was here for the book launch of the Hindi and the Urdu translations of the bestseller book ‘The Ministry of Utmost Happiness.’ The Hindi translation ‘Aapar Khushi Ka Gharana’ which has been translated by Manglesh Darbal, and the Urdu translation ‘Bepanah Shazmani Ki Mumlikat’ which has been translated by Ajurmand Ara were launched. Both these books have been published by Rajkamal Prakashan and Radio Jockey Yunus Khan moderated the event.

During the conversation with Yunus Khan, the famous poet, and translator of the Hindi version, Maglesh Darbal shared his experience of translating the book and said that, “There was a lot of confusion for the title of the book and finally the word ‘Gharana’ was suggested by Arundhati herself instead of Ministry”. While sharing his views about the novel he said that the book is empathetic towards Minorities, Outcasts and the LGBTQ community,

The Urdu translator Ajurnmand Ara on sharing her experience while translating the book said that “It was a very difficult and time-consuming process, to translate the Urdu words while maintaining the originality”.

Northwestern University: Women and men are each…

Breaking silence about the long haul of why the second book was released after 21 years, Arundhati stated that she writes a book when her opinions cannot be expressed in journals, academic essays or poems and she needs to use the narrative of a book.

On being asked about her activism, she stated that she should not be called an activist and does not believe that she is an activist. She stated, “In the old times the job of the writer was to write reality but today it has become to write fiction novels, attend festivals, collect awards etc. I have always been a writer and was never an activist. My essays, journals academic writings are all creative writings which are the job of a writer, to call me an activist is to reduce what activist do, and what writers do”

Ashok Maheshwari, Managing Director of Rajkamal Prakashan said It is a matter of great joy that the translation of this book has come for Hindi and Urdu readers. It is a historical moment that Hindi and Urdu translations of any novel have come together.