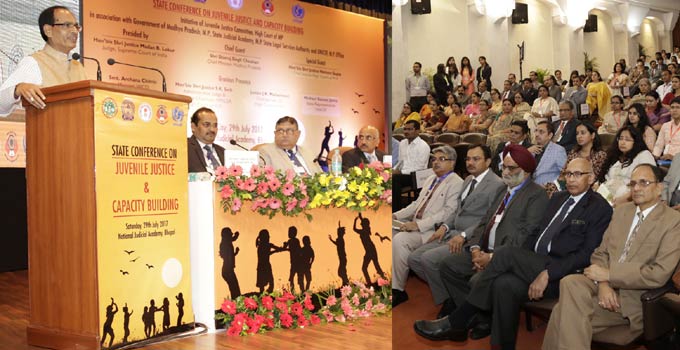 Bhopal : Chief Minister Shri Shivraj Singh Chouhan said that the state government will present assessment on works being carried out in the field of juvenile justice every year so that better work should be undertaken in this direction. He further mentioned that a campaign for education of houseless children and orphans will be conducted. Security arrangements for them will be made. Shri Chouhan was addressing the State Level Conference on Juvenile Justice and Capacity Building at National Judicial Academy here today.

Shri Chouhan mentioned that a strict action will be taken against such criminal elements who lure children towards crime. Directives will be issued to all the collectors to identify such children in their respective districts and to make arrangements for their dignified living. Government is committed to shoulder responsibility of such children. Government is making full efforts in this direction but much more is remaining.

Moreover, Shri Chouhan stated that ample efforts have been made to send orphans and helpless children to schools. He said that there is a need for change in situations which compel children for crime. This is not possible without society’s help. Arrangements for education, scholarship, cycles and to pay fee of talented children are being made by the government. There is a need for work in cooperation of society and government. Society should link itself for protection of orphans and helpless children’s rights. The state government will implement recommendations with honesty in compliance of the Juvenile Justice Act.

Minister for Women and Child Development Smt. Archana Chitnis mentioned that children, women and elders get full respect in Indian culture and society. She said that initiative is necessary to make society sensitive and responsible too towards children’s issues. Smt. Chitnis further mentioned that initiative will be taken with cooperation of Universities and School Education department to give guidance for children’s upbringing and culture.

Supreme Court Justice Shri Madan B. Lokur stated that improvement should be made in the present structure of Juvenile Justice. Children Welfare committees should be equipped with I.T. He further said that conditions favourable for return of child criminals into the society should be created. Skill development is a good option for this. Beside this, arrangement for their nourishment is also must. We will have to think about the children when we think about the future. Civil society can do this work very well.

Justice Shri Lokur further mentioned that services of experts should be utilised for juveniles. Team of Police Administration should be made sensitive towards issues concerning juvenile justice. Emphasizing on need for establishment of Vulnerable Witness Court, he stated that several states have taken initiative in this direction. He said that justice should be in reach easily for everyone. He appreciated the initiative of the state government for presenting yearly assessment .Justice Shri Lokur said that children in distress are not problem, the solution is possible for them.