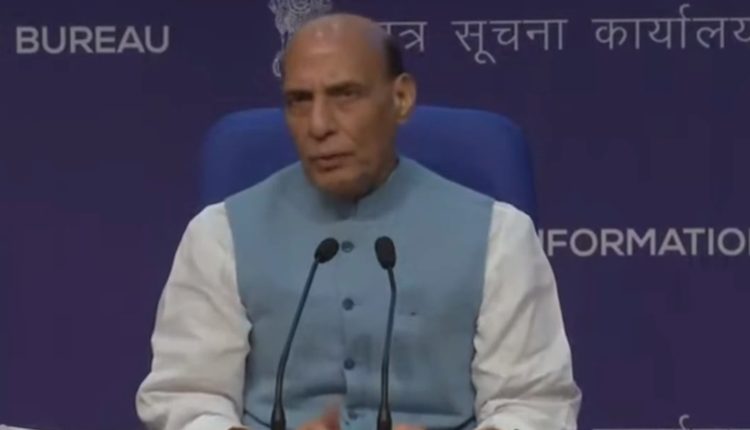 New Delhi: The Centre today cleared the AGNIPATH Scheme for recruitment of youth in the Armed Forces. Briefing media in New Delhi with three Serivce Chiefs, Defence Minister Rajnath Singh said, the youth selected under this scheme will be known as Agniveers. He said, the Agniveers will be getting attractive monthly package with Risk and Hardship allowances as applicable in the three services. Mr Singh said Agniveers will be also paid one-time Seva Nidhi package upon completion of engagement period of four years. The AGNIPATH Scheme cleared by Cabinet Committee on Security allows patriotic and motivated youth to serve in the Armed Forces for a period of four years.

Over forty six thousand Agniveers to be recruited this year. This is a major defence policy reform introduced by the Government to usher in a new era in the Human Resource policy of the three services. The policy, which comes into immediate effect, will govern the enrollment for the three services.

Chief of Air Staff Chief Air Chief Marshal V. R. Chaudhary said, the scheme gives Air Force an opportunity to draw from vast pool of talent available in the country so that they can serve in the Armed Forces with pride.

Air Chief Marshal Chaudhary said, the IAF shall be imparting a wide range of training and exposure to the Agniveers in aviation, weapons and sophisticated ground systems.

Navy Chief Admiral R. Hari Kumar said, Agnipath Scheme is a new era of new thinking and it will positively impact the Human Resources Management of the Armed Forces. Admiral Hari Kumar said right now, Navy has women officers. With Agniveer scheme, women sailors would also be inducted and it is a major step.

Army Chief General Manoj Pande said, Agnipath Scheme is a transformational reform for the Army and the Nation and it aims to bring a paradigm shift in Human Resources Management. General Pande said, it will maintain the balance between youth and experienced personnel.

Agniveers will get a salary of 30,000 rupees to 40,000 rupees per month and allowance as applicable. The Seva Nidhi will be exempt from Income Tax. There shall be no entitlement to gratuity and pensionary benefits. Agniveers will be provided non-contributory Life Insurance Cover of 48 lakh rupees for the duration of their engagement period in the Indian Armed Forces.

During this period of service to the nation, the Agniveers will be imparted with various military skills and experience, discipline, physical fitness, leadership qualities, courage and patriotism. Post this stint of four years, the Agniveers will be infused into the civil society where they can contribute immensely towards the nation building process. The skills gained by each Agniveer will be recognised in a certificate to form part of his unique resume. Agniveers, on completion of the four year tenure in the prime of their youth, will be mature and self-disciplined with the realization to become better version of himself or herself both professionally as also personally. Moreover, the Seva Nidhi of approximately 10.4 lakh rupees would aid the Agniveer to pursue his or her future dreams without the financial pressure.

Upto 25 per cent of Agniveers are selected for enrolment in the Armed Forces as regular cadre. They would be required to serve for a further engagement period of minimum 15 years and would be governed by the existing terms and conditions of service of Junior Commissioned Officers or Other Ranks in Indian Army and their equivalent in Indian Navy and Indian Air Force and that of Non- Combatant enrolled in the Indian Air Force, as amended from time to time. The selection will be the exclusive jurisdiction of the Armed Forces.

AIR correspondent reports, enrollment will be undertaken through an online centralised system for all three services with specialised rallies and campus interviews from recognised technical institutes such as Industrial Training Institutes and National Skills Qualifications Framework, among others. Enrolment will be based on All India All Class basis and the eligible age will be in range from 17.5 to 21 years. For entry into General Duty soldier, the educational qualification is Class 10.

In a transformative reform, the AGNIPATH Scheme has been designed to enable a youthful profile of the Armed Forces. It will be an unique opportunity to the youth to serve the country and contribute to Nation Building. As for the Armed Forces, it will enhance the youthful profile of the Armed Forces and provide a fresh lease of Josh and Jazba. It is envisaged that average age profile of Indian Armed forces would come down by about four to five years by implementation of this scheme.The dividends of a short military service to the nation, society and the youth of the nation are immense. This includes inculcation of patriotism, team work, enhancement of physical fitness, ingrained loyalty for the country and availability of trained personnel to boost national security in times of external threats, internal threats and natural disasters.

Home Minister Amit Shah has termed the ‘Agneepath scheme’ a revolutionary initiative. In a series of tweets today, Mr. Shah said that this scheme will give the opportunity to the youth to serve the nation with a proud future and join the armed forces. He said, in this scheme, youth between 17 and a half years and 21 years will serve the country by joining the armed forces for 4 years through a transparent process.

Mr. Shah said, on completion of the service period, they will get over 11 lakh rupees tax-free service fund package which will empower them financially. He said this will also build capabilities and skills in youth as well as strengthen the defense system of the country.

BJP today lauded the decision of the government for launching the Agnipath scheme for the youth. Terming this a historic decision by the Narendra Modi’s government, party spokesperson Gaurav Bhatia in a media briefing in New Delhi said, this decision will make the country’s future bright and make the army stronger. He said, this will provide an opportunity for the youth of the country to serve the country. Highlighting the salient features of this scheme, Mr. Bhatia said, youths will be recruited on the basis of merit and youth will get the opportunity to join the army.

PM Narendra Modi instructs his govt to provide ten lakh jobs to youth in mission mode over next 1.5 years

iednewsdesk Jun 20, 2022
As the automotive industry rapidly evolves into a future fuelled by electric-powered vehicles, students in…

University of Guelph: U of G Scientists Among Top 2022 Research…

University of Guelph: Nine Honorary Degrees to Be Awarded at U of G…