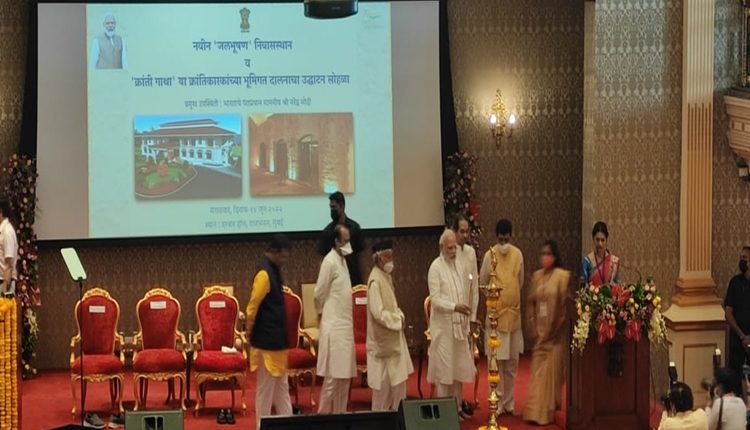 New Delhi: Prime Minister Narendra Modi today said that Mumbai’s Raj Bhavan has been a witness to the democratic incidence in past decades. He said, it has also been a testimony to the resolutions which were taken as oaths for the well-being of the country. The Prime Minister said this while addressing the gathering after inaugurating the ‘Kranti Gatha’ a newly created Gallery of Indian Revolutionaries inside the underground British – era bunker at Raj Bhavan Mumbai and Jal Bhushan, the new residence and office of the Governor of Maharashtra.

The PM said, the new residence of the Governor will give new energy to the governance of Maharashtra. He said, as said by Governor Koshyari, the Raj Bhavan will work as a Lok Bhavan and will serve to give a ray of hope for the people of the state.

He said, Mumbai Raj Bhavan is akin to the culture of Maharashtra which manifests courage, dedication, spirituality and the freedom fight. The Prime Minister said, this place also saw the downfall of colonial rule and the hoisting of the tricolor with pride. The revolutionaries who have got a place in the gallery of revolutionaries will further strengthen the patriotic values.

He said, by seeing the expansion of the sea from the Darbar Hall, we fondly remember the valour of Swantantrya Veer Savarkar.

Mr. Modi said, no matter what was the social, family and ideological differences, the place of agitation; be it anywhere in the country or abroad, the aim was common-the country’s total independence.

He said, Shyamji Krishna Varma’s India House in London was a place frequented by Indians. The mission here too was to free India from colonial rule.

Prime Minister Narendra Modi said that Shyamji Krishna Varma’s India House had become a place of pilgrimage for the freedom fighters in London. He said, Shyamji Krishna Varma died in the year 1930. The PM said, the late leader had made a wish that his ashes be immersed in India when the country gets independence.

Mr. Modi informed that the ashes could have been immersed on the second day when the country got independence way back in 1947. However, it took 73 long years, adding that he was fortunate enough to bring his ashes back in 2003 from London and immersed at his birthplace in Gujarat.

iednewsdesk Jul 5, 2022
Academics at the University of Nottingham will be aiming to inspire a new generation of engineers when they throw…