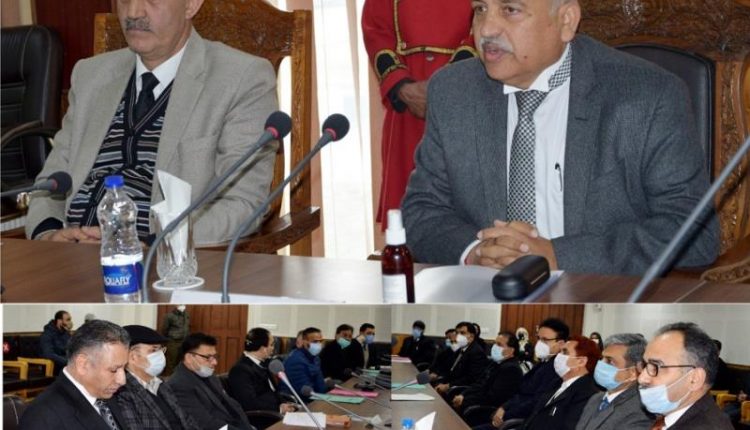 While welcoming Pankaj Mithal on his first visit to Srinagar after his appointment as Chief Justice of Jammu and Kashmir High Court, Justice Ali Mohammad Magrey, said ‘We all are happy to warmly welcome Chief Justice in the heaven on earth’.

He said despite Covid-19 pandemic challenges, the Judges continued functioning through physical and virtual mode following Covid-19 pandemic SOP’s in letter and spirit to ensure that litigants are given access to justice at all times. Justice Magrey quoted renowned Sufi Saint, Sheikh ul Alam’s wise and famous Kashmiri proverb ‘Kriya Khuta Boud Insaaf” meaning ‘Better doing Justice than Meditation’ and emphasised that judiciary is committed to do justice as ordained in the Constitution.

On the occasion, Superintending Engineer and Executive Engineer, PWD (R&B) executive engineer R&B presented a documentary to give overview of existing infrastructural facilities and the introduction of phase-II proposed construction project in the District Court Complex, Srinagar.

Justice Pankaj Mithal, Chief Justice while expressing his pleasure regarding the justice delivery by the judicial officers and infrastructure of the court, said, ‘I am overwhelmed to be present among you in the court of justice’ and said, ‘I am impressed by the status of infrastructure and facilities available here.’ He called the judges of Jammu and Kashmir as best judicial officers and termed the District Court phase-I and II a vision project.

Chief Justice Pankaj Mithal held a separate introductory meeting with senior lawyers of High Court wherein lawyers warmly welcomed the new Chief Justice of J&K and held a brief interaction with him. On the occasion, CJ called justice system incomplete without the lawyers. He said lawyers constitute important part of the Judicial system.

Earlier, Principal Sessions and District Judge, Srinagar, Abdul Rashid Malik, in his welcome speech highlighted the working of District Judiciary Srinagar the strength of judges, the nature of their work, including pendency and disposal of cases and other features. Mr. Malik also thanked the Chief Justice and Administrative Judge for visiting the Court Complex and interacting with Judicial Officers.