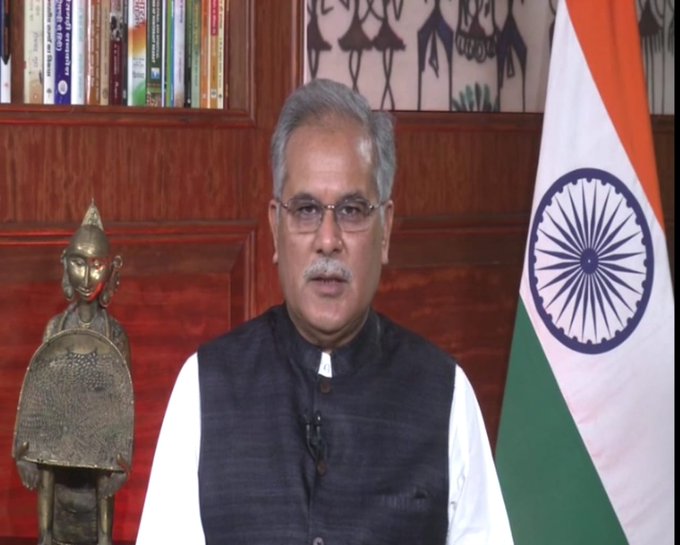 Raipur: Chief Minister Shri Bhupesh Baghel has informed the Union Home Minister, Shri Amit Shah about the problems of labourers of Chhattisgarh stranded in other states and the students studying in Kota, over a telephonic conversation. Home Minister Shri Amit Shah assured Shri Baghel that quick decision will be taken, as soon as a proposal is received from the State Government in this regard.On Chief Minister’s instructions, Chief Secretary of Chhattisgarh Shri R.P. Mandal has requested Union Home Secretary Shri Ajay Bhalla, in a letter addressed to him, to allow the return of labourers and students of Chhattisgarh stranded in other states.

Shri Mandal has written in the letter that the ongoing nationwide lockdown is being strictly implemented in Chhattisgarh state as well. Inter-state traffic at the bordering districts of Chhattisgarh has been restricted. This has greatly helped in curbing the spread of Covid-19. Many labourers of Chhattisgarh are stranded in other states such as Haryana, Maharashtra, Punjab, Karnataka, Jammu and Kashmir. All possible steps are being taken by the State Government to ensure the redressal of their problems. In addition to facilitation of arrangements such as food and stay, financial aid is also being provided by the State Government.

In the letter addressed to Shri Ajay Bhalla, Chief Secretary Shri Mandal has written that, as one month of the lockdown period has passed, many sections of society in Chhattisgarh have raised the issue of inconvenience being faced by the stranded labourers and students in other states. Apart from this, some states have been granted permission to bring back the students of their respective states from Kota. Chhattisgarh too wants to facilitate the home-coming of the students. Chief Secretary Shri Mandal has requested Shri Bhalla to allow the returning of stranded students and labourers, on humanitarian grounds. Shri Mandal has also requested the Central Home Secretary, in the letter, to direct other states to provide necessary assistance and issue passes for safe travel of students and labourers returning to Chhattisgarh.

Shri Mandal has written that this permission, if granted, will provide relief to the worried families of these labourers and students. Chhattisgarh Government will ensure that all those returning back are put on quarantine. Shri Mandal has requested the Central Home Secretary to grant written permission, with regards to this matter.

Awareness should remain even after control of Corona in the state: CM Shivraj Singh Chouhan