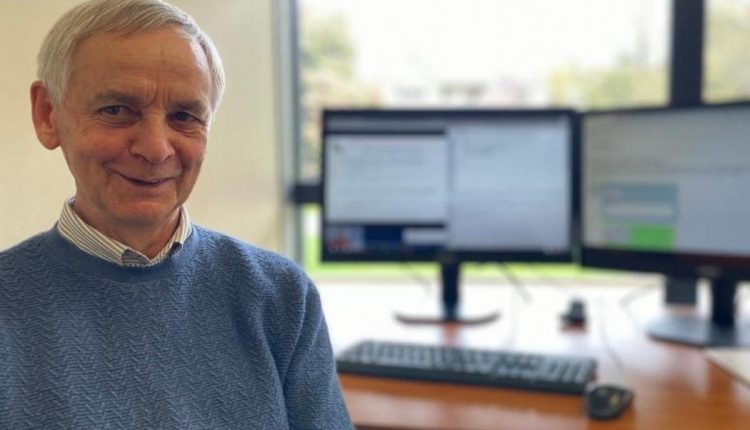 A Canterbury lecturer who fell in love with computers almost 60 years ago and has been riding the technology wave ever since, has won a national teaching excellence award.

Dr Lobb has been a Computer Science lecturer at the University of Canterbury since 2004 when he moved to Christchurch from Auckland with retirement and South Island tramping trips in his sights. Instead, he took on a part-time, temporary contract to teach a new programming course in the Computer Science and Software Engineering department.

Nearly 18 years later, he is still lecturing at UC and he says that’s because he loves what he does.

“I focus on teaching, on the students, and on sharing my enthusiasm for programming. It’s a great place to be.”

Now an Adjunct Senior Fellow, Dr Lobb says he is excited about the recognition, but also “a little embarrassed” to receive such a prestigious award – which comes with a grant of $20,000 – 18 years into what was meant to be retirement.

“I enjoy my work so much that I don’t even think of it as work. It’s my life. I’ve grown up with computers, I’m a computer geek. I was one of the early adopters and I worked as a programmer here and overseas. It has been a fun ride and it’s still going.”

Dr Lobb’s first encounter with computers happened in the late 1960s. He was a Master’s student in Auckland University’s Radio Research Centre and the machine was the first mini-computer in the Southern Hemisphere, funded by NASA. He discovered a love for computers and computer programming that has continued throughout his career.

His teaching philosophy revolves around transferring his enthusiasm to his students. He likes to think outside the box and has been instrumental in revamping teaching and assessment, including quickly adapting a first-year Computer Science course to remote learning during last year’s Covid-19 lockdown and setting up a help-line service, called LiveZilla, to give students easier access to tutors.

He is also known internationally in programming circles for developing CodeRunner, a ground-breaking teaching and assessment tool now used by hundreds of thousands of students at universities around the world. Dr Lobb designed and built the free, open-source system to give students immediate feedback on their efforts in a gamified way.

“My online teaching and my in-person teaching are guided by the same principles. Students learn by doing and they learn faster if they get fast, motivating feedback,” he says.

“He leads by example and by an unwillingness to accept the status quo as sufficient. That’s leadership. He’s a mentor for the whole department and beyond.

“He has inspired outstanding young New Zealand students to pursue computer science at undergraduate and postgraduate levels, and he has led continuous innovations in the computing curriculum at Canterbury.”

One of Dr Lobb’s former students, Joey Scarr, now works as a Senior Software Engineer for Google Sydney after graduating with a PhD from UC in 2014. He says Dr Lobb had a big impact on his success. “His infectious enthusiasm for programming shone in every class, and his wry sense of humour and knack for explaining difficult concepts made him a favourite teacher amongst my peer group.”

UC’s Deputy Vice-Chancellor Academic Professor Catherine Moran says Dr Lobb’s national recognition is well-deserved. “He is an example of how hard work, innovation and genuine enthusiasm for teaching can help students thrive and succeed. We congratulate him on his achievements.”

Dr Lobb was the first person to be appointed a lecturer in Computer Studies at Auckland University in 1979.

In 2018 he received the Clinton Bedogni Prize for Open Systems for the outstanding contribution to Computer Science education in recognition of his development of CodeRunner.

In 2011 he was awarded a UC Teaching Award and last year he received the University of Canterbury Teaching Medal for teaching excellence.

He has also coached many University of Canterbury programming contest teams over the years and attended three World Final competitions. He is the current Vice-President of the South Pacific Competitive Programming Association.