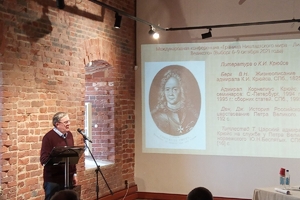 This year marks the 300th anniversary of the signing of the Nystadt Peace Treaty, which ended the Northern War of 1700-1721.
As a result of this agreement, new lands became part of Russia, including the territory of the Northern Ladoga area.

On October 7-8, the international conference “Border of the Nystadt Peace – the Line of Peter the Great” took place in Vyborg, dedicated to the 300th anniversary of the conclusion of the Nystadt Peace Treaty. The conference was organized by the Vyborg United Museum-Reserve, the Committee for the Preservation of the Cultural Heritage of the Leningrad Region, the Museum Agency of the Leningrad Region, the Petrozavodsk State University, the Russian Foundation for Basic Research, the D.S. Likhachev and the Peter the Great Institute.

On the terms of co-financing, the funds received by PetrSU from the project “Peter the Great and His Era in the Historical Memory of the Peoples of Karelia” were used for the conference under the RFBR grant “Peter’s Era in the History of Russia: Modern Scientific View” “for 2020-2022.” (project No. 20-09-42034).

The plenary session heard the reports of the Director General of the National Archives of Finland Yu. Nuortev “Bishop Jacob Lang and the transition from absolute theocratic monarchy to the theory of sovereignty of Jean Boden as a consequence of the collapse of the Swedish great power” and Professor of PetrSU A.M. Pashkova “Vice Admiral Cornelius Cruis and the Creation of the Baltic Navy”.

Within the framework of the conference, six sections worked: “European diplomacy on the way to the Nystadt peace”, “Demarcation of the Russian-Swedish border of 1722”, “Returning home: Russian prisoners of war in Sweden and Swedish prisoners of war in Russia”, “Material and intangible heritage of the border of the Nystadt peace “,” Cross-border contacts: local population in the conditions of war and peace “and” Historical memory of the Peter’s era in the north-west of Russia and in Finland “. In total, 27 reports were heard, including 1 report from Sweden, 5 reports from Finland and 1 report from Belgium. Russian participants represented Moscow (1 report), St. Petersburg (7 reports), Vyborg (3 reports), Petrozavodsk (4 reports), Volgograd (1 report), Priozersk (1 report), Shlisselburg (1 report), Sortavala ( 1 report) and Kurkiyoki (1 report).

PetrSU was represented at the conference by Professor of the Department of Russian History, Doctor of Historical Sciences. A.M. Pashkov and Associate Professor of the Institute of Philology, Ph.D. N.G. Urvantseva, who made a report “Peter I in the commemorative practices of Petrozavodsk and Marcial waters”, as well as a graduate of the Institute of History, Political and Social Sciences in 2021 M.I. Petrova, who made a presentation “Ilmee Village: Seven Centuries on the Border”.

A collection of articles is expected to be published at the end of the conference.