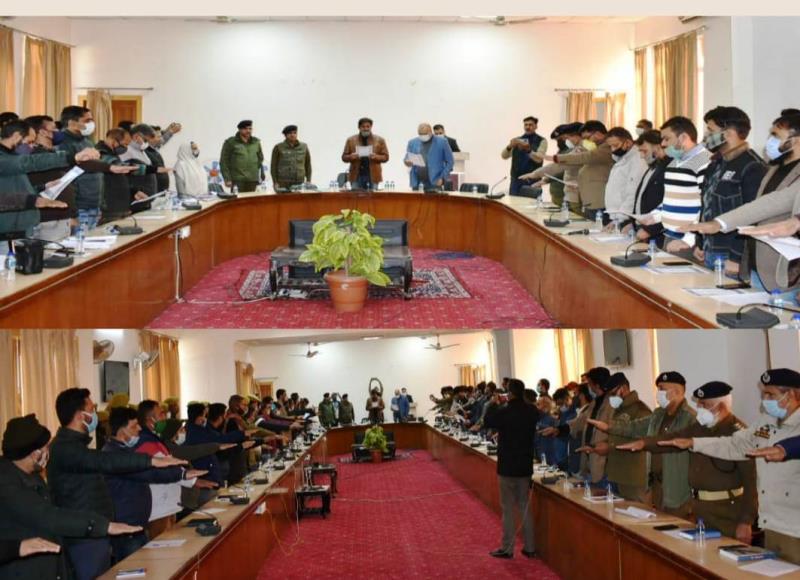 Jammu: The Office of Divisional Commissioner Jammu today organized a function to mark the Constitution Day.

The reciting of the Preamble was followed by a pledge taking ceremony. The Div Com administered the pledge to the staff for upholding the fundamental duties as enshrined in the Constitution.

Similar functions were held in other government officers including district administrations, educational and other institutions.

To commemorate the adoption of the Constitution of India and to honour and acknowledge the contribution of the Founding Fathers of the Constitution, District Administration Kishtwar under the overall supervision of Deputy Commissioner Ashok Kumar Sharma celebrated the Day across the district.

On the occasion the participants including District/Sectoral Officers were administered a pledge regarding the fundamental duties at their respective headquarters.

Besides the awareness among the people regarding important features of the Constitution were created at the block headquarters.

Similarly, all the government offices and other institutions celebrated Samvidhan Divas in the district.

The adoption day of the Constitution of India was observed by the District Administration Doda by organizing a function under the supervision of Deputy Commissioner, Dr Sagar D Doifode.

Additional District Development Commissioner, Surat Singh read out the Preamble in presence of the officials of the DC office. He urged them to uphold the principles enshrined in the Preamble of the Constitution while serving the citizens of the country.

Similar functions were held in other offices of the district where the participants were briefed about the significance of the Constitution of India and Preamble.

District Administration Kathua, organised a function where Deputy Commissioner, Op Bhagat and other officers read out the PREAMBLE of Constitution of India and took the pledge to uphold the fundamental duties

Similar programmes were also organised in the tehsil and block headquarters of the district.

District Administration Reasi celebrated the 71th Constitution Day and took Pledge on the Preamble of the Constitution to discharge fundamental duties with sincerity and honesty.

Speaking on the occasion, Deputy Commissioner, Indu K anwal highlighted the importance of Republic Day and stated that it is the most significant day in the history of India as on this day the law of the land, the constitution of India came into force after a prolonged struggle and we became a Republic nation.

Additional Deputy Commissioner Reasi, Rajinder Sharma, ACR, Sanjay Badyal and other employees of the DC office participated in the event.

Speaking on the occasion, the DDC said that the day is celebrated to recall our role and responsibilities towards our country and to uphold the integrity and sovereignty of our country

Similarly, all the officers celebrated the constitution day in their respective offices and took pledge of preamble of constitution.

Among others, Additional District Development Commissioner, Ashok Kumar, besides other district officers were present on the occasion.

The Range Police Headquarters Jammu read out the “PREAMBLE” at 1100 hours this morning to mark the celebration of Constitution Day.

Raman Kumar, Administrative Officer, RPHQ Jammu gave the brief introduction of the constitution and impressed upon all the staff members to work more efficiently and honestly. He advised them to deal with the civil society politely to bring the police department more laurels. Sunita Kargotra, CPO ZPHQ/RPHQ was also present at the pledge ceremony.

The employees pledged to uphold the fundamental duties. The Director Sheep Husbandry Department Jammu Dr. Sanjeev Kumar presided over the pledge Ceremony and highlighted the significance of celebration of the Constitution Day on 26th November.

The Constitution Day was celebrated by faculty of SCERT J&K, The entire the staff assembled and readout the Preamble to the Constitution, thereby reaffirming their commitment to uphold its ideology.

Earlier, Deepak Sharma, Senior Academic Officer, SCERT J&K highlighted the values and principles enshrined in the Constitution and sensitized the faculty about the Constitution Day as it is being celebrated across the country to mark the adopting of the Indian Constitution by the Constituent Assembly.

The Directorate of Rural Development Jammu participated in the community pledge taking ceremony led by President of India, Ramnath Kovind through video conferencing.

Director, Rural Development Jammu, Sudershan Kumar, presided over the celebration at Panchayat Bhawan here and read out the Preamble of the Constitution of India.

All the officers and other staff members pledged to uphold the constitution and rededicate themselves for nation building.

The officers/officials of SDRF 2nd Battalion Jammu participated in “PREAMBLE” ceremony with due observance of the Guidelines/SOPs with regard to COVID-19 Pandemic.

The “Preamble” to the Constitution of India was read out by Vinod Kumar Sathu, Dy.SP. All the arrangements for the purpose were made by the Battalion Adjutant Anita Pawar.

A pledge ceremony was convened in the museum of Horticulture complex, Talab Tillo Jammu to mark the Constitution day celebration.

The celebration began with reading out Preamble under the chairmanship of Director Horticulture, Ram Savak.

The staff also took a pledge ‘to make our own contribution to ensure internal security of the country.

The Principal, Dr. S.P Sarswat along with teaching and non-teaching staff and the students of College participated in the celebration of the Constitution Day with Zeal.

H.O. D Chemistry, Dr. Avinash Kumar Gupta initiated the proceedings and H.O.D Political Science Prof. Neena Kumari readout the Preamble to the Constitution of India both in English and Hindi to spread the thoughts and ideas of Dr. B.R Ambedkar, the architect of the Indian Constitution.

The District Legal Services Authority (DLSA), Udhampur, celebrated the Constitution Day under the supervision of Principal District and Sessions Judge and chairman of the DLSA, Mohan Lal Manhas.

Besides others, Secretary, DLSA Sandeep Kour, District Mobile Magistrate Udhampur, Ajay Kumar and Additional Special Mobile Magistrate Girja Shavan were present on the occasion. Judges and courts’ staff took a pledge on the Preamble of constitution.

Similar programmes were held at Ramnagar, Chenani and Majalta by the Tehsil Legal Services Committees.

Constitution day function was organized at Directorate of FCS&CA Jammu which was presided by Jatinder Singh, the Director. Senior officers/ Officials from the department including Joint Directors, Deputy Directors and Assistant Directors of City and Rural Circles participated in the event.

Preamble was read out to the officials for preserving/upholding of the unity integrity and security of the nation.

Directorate Of School Education Jammu celebrated the 71st Constitution Day by organising ‘Preamble Reading and Oath Ceremonies’, across all the districts of Jammu division.

Students and staff members of all the schools of Jammu region participated in the event to raise awareness about the Indian Constitution and took oath by reading out the Preamble and pledged to uphold the Constitution of India with utmost dedication, sincerity and fervour .

Students of the school along with teachers participated in the event wherein a Pledge-taking ceremony was organized by Dr.Arun Manhas, Project Director, Samagra Shiksha.

While interacting with the students, Dr.Arun Manhas informed that ‘Constitution Day’ is celebrated in India on November 26, every year to commemorate the adoption of the Constitution of India. Constitution Day is also known as the ‘Samvidhan Divas’. He further added that on this day in 1949, the Constituent Assembly of India formally adopted the Constitution of India that came into force on 26 January 1950. Dr.Manhas stressed that the young children being the future resource of the nation must respect the constitution in true letter and spirit and should abide by all Fundamental Duties.