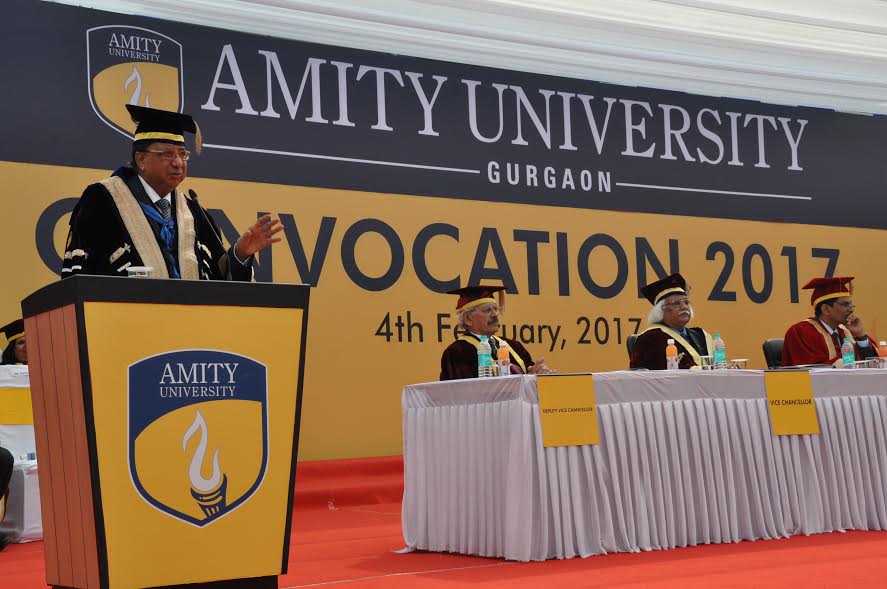 By India Education Diary Bureau Admin Last updated Apr 23, 2020
Share
Guragaon: The third Convocation Ceremony of Amity University Haryana was held today for the students who have successfully completed their Academic Programmes in 2016 at University Campus, Panchgaon, Manesar.
Convocation 2017 was a day of great joy and exhilaration for the graduates and their parents who went down the memory lane, reminiscing university days while re-uniting with their friends and Alma matter.All the graduands donned beautiful black robes with caps and coloured scarves representing UG/PG programmes.
Over 1034 graduands of various Programs including Engineering & Technology, Management, Applied Sciences, Journalism and Mass Communication, Medical Science, Behavioral Science, Languages and Commerce received UG and PG Degrees along with 50 Gold Medals, 42 Silver Medals and 33 Bronze Medals. Four students were awarded PhDs and meritorious students from different institutions were felicitated with 12 Dr Ashok K Chauhan Scholarshipsand 15 BaljeetShastri Awards
Over 781 UG students were given Minor Certificates for proficiency in the areas like Journalism, Animation, Management and Economicsalong with their UG Degrees.
The procession comprising of Trustees of the Management, senior officials of RBEF and Directors of various Institutes of Amity University entered the Convocation grounds, led by a band of pipers
Dr. Assem Chauhan, Chancellor, Amity University Haryana declared the Convocation 2017 open.
Related Posts

Jan 27, 2022
Welcoming the distinguished guests and august gathering, Prof. P B Sharma, Vice Chancellor presented a brief report of the University in which he touched upon the key achievements and initiatives that have been taken during the year 2016-17.He stressed that Amity University pursues innovation with a passion, supports students in their innovative project worksand encourages diversity of talent that result in accelerated innovation, marking the success stories of the University, community of students and faculty.” Prof. Sharma highlighted the recent innovative products of Amity’s Centre of Robotics and Artificial Intelligence such as Gesture based home automation, Gesture based Robotic Arm, Bowling Robot, and Nano Robot amongst others.
Prof: Anil D Sahasrabudhe- Chairman, AICTE, Dr. Trilochan Mohapatra- Secretary (DARE) & Director General (ICAR) and Prof. Govindarajan Padmanaban -Former Director, IISc, Bangalore were conferred with Honorary Doctorate Degrees by Dr. Ashok K Chauhan- Founder President, Amity Group, Dr. Aseem Chauhan and Dr. (Mrs.) Amita Chauhan- Chairperson, Amity International Schools in Science during the Convocation.
Delivering his acceptance speech, Prof. Anil D Sahasrabudhe, Hon’ble Chairman, AICTE commended Amity for its fundamental and applied research initiatives which have invigorated the research culture in the country. Addressing the graduands, Prof. Sahasrabudhe motivated them to work hard, be an incessant learner with an ability to critically analyze and complex problems, which an Industry looks forward to in employees. Talking about the change in the role of AICTE, he remarked that AICTE wants to be looked upon as facilitators and mentors to Engineering and Technical Colleges and Universities rather than as a regulator. He shared that AICTE has been giving more importance to teaching –learning methods adopted by the Institutions. He outlined various measures and initiaves recently introduced by AICTE which will act as “Game Changers” for the Institutions such as “Smart India Hackathon”, “Promotion of Student Startups by  Engineering Colleges which has a potential to create millions of jobs” and “Inclusion of 20% faculty from Industry as Adjunct Professors, leading to knowledge sharing and creation of new ideas.”
Congratulating the graduands and their families, Dr. Ashok K Chauhan- Founder President, Amity Group said that Amity graduands should be called “distinguished achievers who have the capacity and capability to change the country and change the world”. Dr. Chauhan urged the graduands to be resolute and dedicated to the goals in their lives which will help them in becoming the best in their profession. Dr. Chauhan remarked that Indians are the best in the world and Amity students have no parallel worldwide since they have been empowered with the education which is a combination of best of East (values, ethics and sanskaars) and West (Latest information delivered through latest technology).
Accepting the Honorary Degree and addressing the gathering, Prof. Govindarajan Padmanaban congratulated Amity for bringing in new dimension into the field of education through Amity Group of Institutions in India and abroad. He remarked that there have been lot of innovations in the field of Science and Business based on Communication and Information Technology which, no doubt, have permeated every facet of life and have enormous impact in revolutionalizing numerous sectors including Education. He stressed that for making Indian educational Institutions feature amongst top 100 Global Universities, more focus needs to be given to core Science and Technology. He remarked that Computer Science and Information Technology, being enabling Sciences, should be taught to everyone but at the same time, Basic Sciences such as Biology, Mathematics, Physics and Chemistry should be promoted for improving the quality of Indian education, health, agriculture and environment. He expressed his hope that Amity Unuiversity, with the kind of research environment it provides to its students and faculty members, is geared to become one of the top 10 educational Instituitions globally in near future.
Expressing his pride and honor in accepting the Honorary Doctorate Degree in Science, Dr. Trilochan Mohapatra- Secretary (DARE) & Director General (ICAR) applauded Amity for shaping the lives and building the careers of the students, who have been nurtured to become success stories in future. He remarked that India is growing and it is estimated that India will become most populous country by 2030, surpassing China. He remarked that in order to meet the demands of the growing population, Innovations need to be accelerated in frontier areas such as Science, Technology and Agriculture to attain self sufficiency in dairy, egg, poultry, horticulture and other areas. He stressed that focus needs to be shifted from production centric approach to market centric approach in the value chain and averred that success is possible through collaborative research and partnerships, working together with synergetic efforts.
Prof. (Dr.) Raj K Tiwari, Professor of Microbiology and Immunology and Program Director, NYMC, New York, USA; Dr. Yuyutsu- Globally Renowned Poet and Creative Writer; Prof. Bal Ram Singh- President, Institute of Advanced Sciences, Dartmouth, US and Dr . B.L. Dubey, Renowned Clinical Psychologists Adjunct Faculty, University of Alaska, US were conferred Honorary Professorships.
The Convocation ceremony was declared closed by Chancellor, AUH followed by National Anthem.
Share FacebookTwitterGoogle+ReddItWhatsAppPinterestEmail