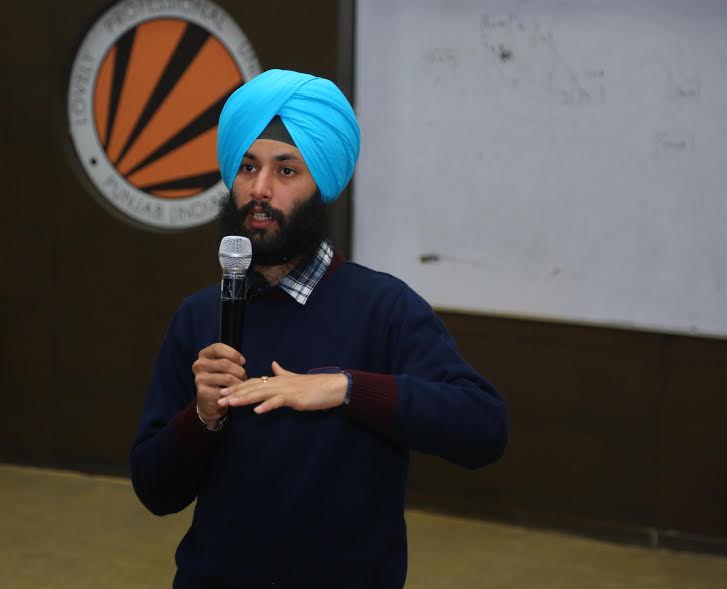 By India Education Diary Bureau Admin Last updated Apr 23, 2020
Share
Jalandhar: Lovely Professional University student, Hansjeet Singh Duggal has won 1st runners up award in Students’ Emmy and bronze medal in Student Oscars. Presently, he is settled in California as a qualified ‘Visual-Effects (VFS) artist. Hansjeet’s artistry proved winning at 43rd Student Academy Awards, commonly known as ‘Student Oscars’, held in California. These awards are presented by Academy of Motion Picture, Arts and Sciences (US) for excellence in cinematic achievements. Established in 1972, the awards are to provide a platform for emerging global film-makers by creating opportunities within the industry to showcase their work and art. A graduate of LPU School of Business, Hansjeet has rendered his skills in many Hollywood projects/films. After winning coveted awards, Hansjeet visited LPU campus with an objective to guide LPU students to “Think Big” & “Follow their Passion”.
Hansjeet conducted exhibition cum workshop at LPU campus on ‘Virtual Reality’, where he interacted intensively with students of computer applications, management, journalism and film production. He explained them about those computer technologies which generate the realistic images, sounds and other sensations that replicate a real environment. He also explained how these applications are utilized in the world of entertainment, fashion, sport, media, films, military, education, healthcare and many more.
Related Posts

Jan 21, 2022
The theme of his photography exhibition was -‘For Love of Dreams: A Show of Aesthetics’. Under this, he displayed 21 pictures capturing and conveying the diversity of the United States and the way different cultures coexist therein. Talking about US he shared: “The US has such wide opportunities and freedom for diverse communities that, as a result, its own culture has grown diverse. Similarly, my alma-mater LPU exists with much celebrated diversity.” Duggal also conducted a seminar on story-telling where he talked about ‘Contemporary Cinema’.  He shared his rich experiences with LPU students and talked about the greatness of American film-makers. Hansjeet told that while working on various Hollywood projects he has gained an exposure for even those aspects which were never explored before, even in Hollywood.
Sharing about his previous experience at LPU, he says: “It is indeed a wonderful experience to be at LPU again and to share that knowledge which I have acquired from my peers in America. My time at LPU was very inspiring and encouraging. In addition to polish me in my studies, LPU shaped me to be a good orator. My mentors at LPU culled my skills out which they identified in me. I have been drawing and sketching since my school days, and only when I joined LPU I learnt and realized the application of the same. Now I am applying the same talent abundantly for my professional life. I want to advise you all to think big & follow your passion to further shine in life.”
Share FacebookTwitterGoogle+ReddItWhatsAppPinterestEmail