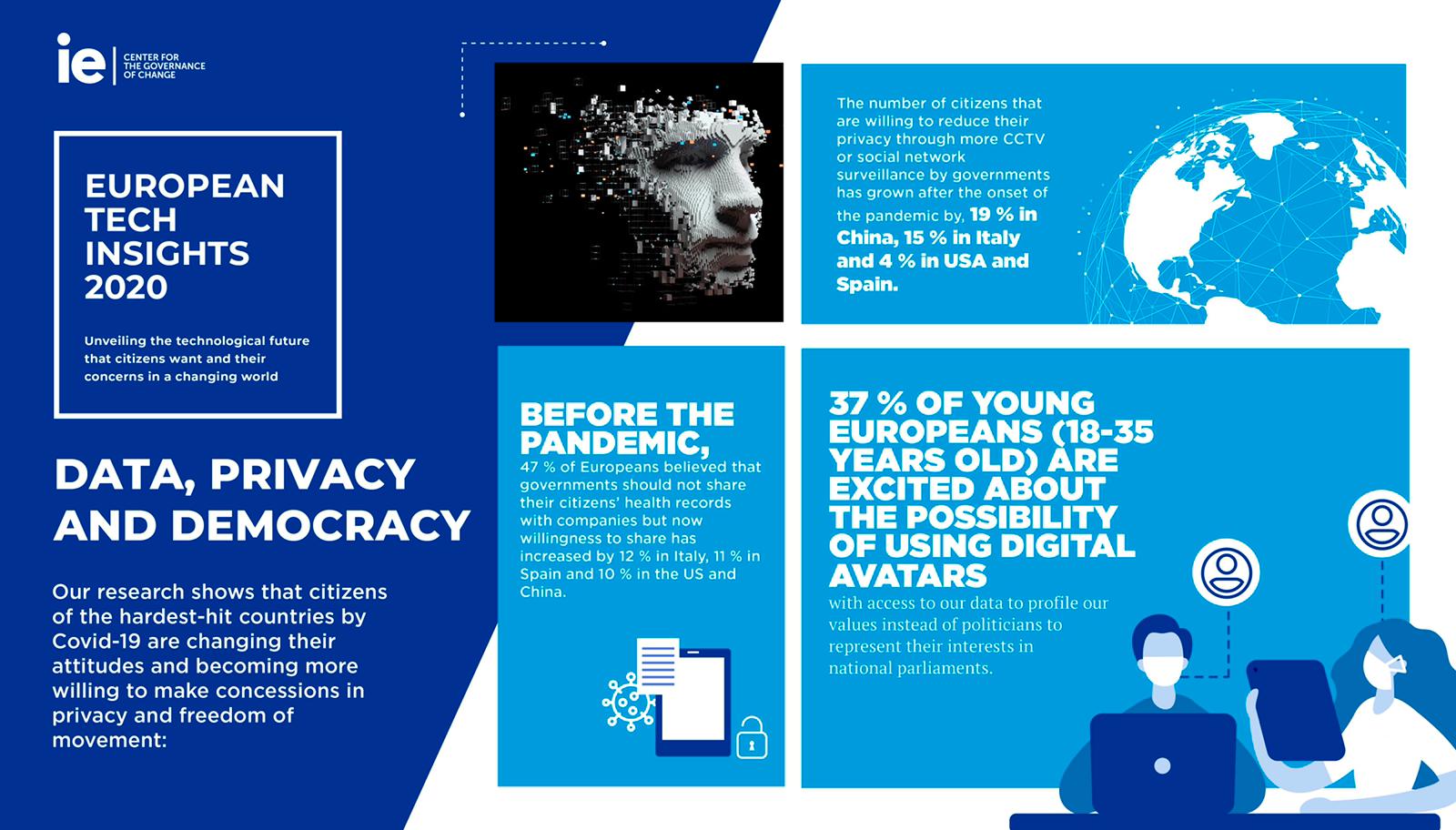 COVID-19 HAS HAD A MAJOR IMPACT ON GLOBAL ATTITUDES TOWARDS DATA PRIVACY, POLITICS AND THE REGULATION OF NEW TECHNOLOGIES

Madrid: The pandemic has caused European citizens to be increasingly supportive of state surveillance and the use of personal data to combat the spread of the virus, and regulation to curb the impact of automation on jobs. This is one of the main conclusions of the second edition of the annual European Tech Insights report by IE University’s Center for the Governance of Change (CGC).

UK regulator confirms that people should continue to receive…

UK: Sixteen colleges to benefit from next phase of fund to…

UK: Specialist job coaches to help young people onto the…

The European Tech Insights 2020 report [https://www.ie.edu/cgc/research/european-tech-insights/], explores how the general public across nine European countries (France, Germany, Estonia, Italy, Spain, Portugal, Poland, The Netherlands and the United Kingdom) feel about the Fourth Industrial Revolution and the role technology and tech companies play in society, compared to peers in the US, China, & Mexico. The survey covered 2,883 respondents across the globe.

Before the pandemic, 53% of Europeans believed that governments should not share their citizens’ health records with companies like Google without their previous consent, even if doing so would help developing new treatments and help early detection of diseases. In the past three months however, these privacy concerns have decreased.

–          In two of the European countries first hit by the coronavirus, Italy and Spain, an overwhelming majority (79% and 67% respectively) now support the implementation of restrictive tracking systems like the ones deployed in China.

–          Similarly, the number of citizens that are willing to reduce their privacy through more CCTV or social network surveillance by governments has also grown in over the last three months by 15% in Italy, 7% in the USA and 4% Spain.

–          69% of Americans and 51% of Chinese disagreed with sharing their personal data before the pandemic and this number has now decreased by 10 percentage points in both countries since January.

The European Tech Insights 2020 report also found that Covid-19 has increased anti-automation sentiments, but there is a notable generational divide in perceptions on limiting automation in order to save jobs:

–          After the onset of the pandemic, support for limiting automation almost doubled in China, from 27% to 54%, and there was a 14% increase in Spain by mid-April when the country was experiencing a record number of cases.

–          For citizens under 55 the majority support limiting automation, whilst those over 56 are less supportive of limitations (49% against and 32% for).

–          At the same time, a majority of Europeans – with as many as 70% of Britons – find confidence in their skills and think that robots and computers will not be able to do their jobs better than them within the next 10 years, an outlook that is more prevalent among the older generation. This figure is similar for France and Poland but lower in Mexico (55%) and China (25%)

–          37% of young Europeans (18-35 years old) are in favour of using ‘digital avatars’ – algorithms with access to our data to profile our values – instead of politicians, to represent their interests in national parliaments. By contrast, only 19% of older cohorts are excited about that option. In China, support is significantly higher with 61% being excited about digital avatars.

–          41% of Europeans think that Europe should follow the US example and raise tariffs on Chinese products to protect its regional economy. This position is particularly popular in France and Poland, where over 50% of citizens support more trade barriers. In contrast, Germany and Estonia are strongly against this proposition.

–          A majority (49%) of Chinese citizens think that China should use its political and economic strength to prevent Europe from raising tariffs.

–          More than 50% of Europeans think that governments should adopt new regulation forcing companies of the gig economy like Uber and Deliveroo to comply with the same labour rules than traditional companies.

–          70% of Europeans surveyed think that governments should increase taxes on air travel, particularly on domestic flights that can be substituted by a train journey, in order to reduce the environmental damage. This share is higher among older demographics than younger ones.

–          Citizens of four of the countries most affected by the Covid-19 pandemic strongly support raising taxes for companies. Europeans favour raising taxes on big tech companies (53 % of Italians and 40 % of Spaniards think that technological companies should pay more taxes to enable governments to finance the recovery), while US and Chinese respondents think that all companies should be taxed more, not only technological ones. In all four countries, less than 15 % of respondents think that there should not be increases in taxes.

UK: Sixteen colleges to benefit from next phase of fund to transform facilities