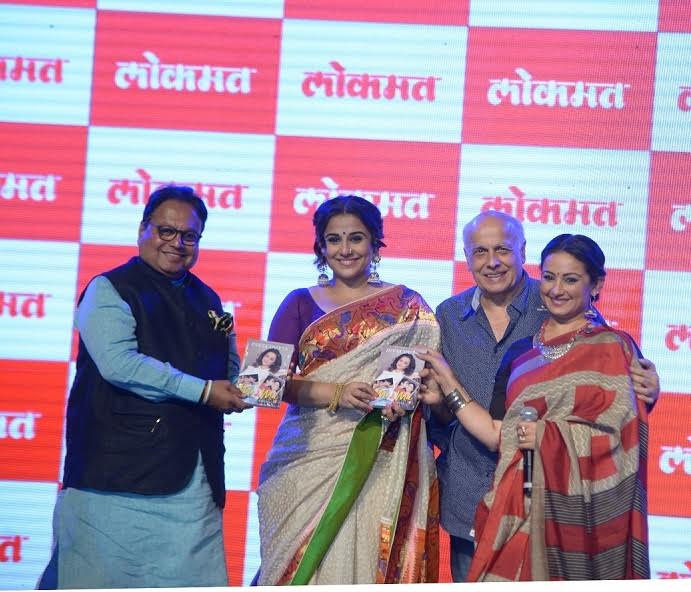 Pune: To recognize the efforts and contribution made by women in their respective fields, Lokmat, Maharashtra’s and Goa’s Number 1 newspaper celebrated womanhood through its 6th edition of Women’s Summit 2017. In association with UN women and UNICEF, the women’s summit called ‘ASTITVA’ (Through Her Eyes) the ultimate expression of the womanhood witnessed women achievers from different walks of life who shared their experiences, views and opinions on various topics.
Actress Vidya Balan, Film Maker Divya Dutta and Olympics Wrestler Geeta Phogat shared a panel to discuss on women empowerment.

There were three categories of awards, Veena Devi Jeevan Gaurav Puraskar, Jyotsna Devi Karya Gaurav Puraskar and Lokmat Sakhi Sanman Puraskar which were given away to women in different categories like Social, bravery, health, education, art& literature and business. The summit was a platform to know a women’s perspective, her views and opinions and to felicitate the achievers.

At a panel discussion, Geeta Phogat said, “A woman contributes to 40 % of the sports industry across the world. Dangal was a platform to bring in a change in the minds of people and to create awareness in the world not only about wrestling as a sport but to showcase that even women can make a difference in the society.” When asked about Haryana being the leading state in killing of a girl child, she commented, “In our society even today, girls are not given their rights and not considered at par with men. This mind set is slowly now changing, women are coming forward with courage and power to prove to the world and to make a difference in the society. ”

Vidya Balan, renowned Bollywood actress shared her excitement to play a role of an unashamed and unapologetic powerful woman in Begam Jaan. She said, “My work is my extension as a woman and I think most successful and powerful women feel awkward and guilty for being most powerful but I rejoice my power and I’m discovering my power day by day. We have voices within all of us, but it is cloaked under societal pressures. When you have nothing to lose, it is very liberating. Every woman should be true to herself and her truth will be discovered through her actions.”

On Women empowerment Mahesh Bhatt, Producer and Director expressed his views saying “Feminism is not a gender, women are very against women and at times men will give their life for a woman. As feminism is human aspiration. I owe whatever I have to the women in my life”

Film Maker Divya Dutta unveiled her book called “Me and Maa”. When asked about her relationship with her mother, Divya Dutt mentioned, “I have had 3 different types of relationships with my mother; Firstly, as a mother, a best friend and a role reversal, my mother being a daughter.”
Her book reveals her life and her connect with her mother speaking about how she has been a strong pillar of support for Divya’s success.

Speaking on the occasion Mr. Vijay Darda, Chairman, Lokmat Media Pvt Ltd said, “We at Lokmat are very proud to host the 6th Women’s summit today to recognize the contribution and achievements of women. Through this platform we give our audiences and readers an opportunity to witness the role model women, who shared their views and opinions to motivate today’s women to achieve success and reach their dreams.”