Apart from a singular and fierce desire to excel in sports, Andhra Pradesh’s early medallists in the Khelo India Youth Games here – Rajitha, Pallavi and Sireesha have one more thing in common.

Each of them comes from a heart-wrenchingly poor background.

Let alone struggling to keep the fire in their bellies alive, their parents have been battling for years to stoke just the ‘chulas in their tiny hutments.

Late on Tuesday evening, after a windfall of medals, June Gallyot, the Sports Authority of Andhra Pradesh official, could not hold herself back. “The entire camp got so excited that we partied all through the evening.” 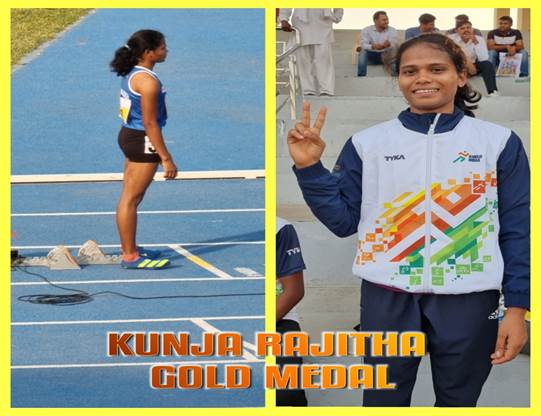 Rajitha sprinted to gold in the Girls 400 metres while Sireesha took the bronze behind her. Pallavi, then, lifted the first gold for AP in the 64kg category.

“Each of them has a very sad story to tell. This is poverty at a different level,” June explained. “This is of course not the common strain only in athletics. It’s the same story in several other sports.”

The only redeeming factor is that sport is providing talented girls like this trio a platform to forget their woes for brief spells, of not leave them behind. Over the last few years, Khelo India Games have discovered innumerable such motivated gems and provided them succour and scholarship, even helping some of them rise to the topmost level.

Rajitha, belonging to the Koya tribe, lost her father at a young age. Her mother Bhadramma had to take care of five children in Ramachandrapuram, a quaint village in the district of East Godavari in Andhra Pradesh.

“She worked as a labourer, morning to night, but still couldn’t earn enough to feed all of us. All of us used to gather dried tree leaves and twigs to kindle our hearths because we couldn’t buy kerosene,” an emotional Rajitha revealed. “It was a daily fight, to survive. But my mother, like a true warrior, never gave up,” she added.

But then, fortunately, sport came as a knight in shining armour. Her talent for running was spotted by SAAP coaches Vamsi Sai Kiran and Krishna Mohan who honed her skills. She was then selected for a Tenvic-SAAP sponsored camp where she got the opportunity to train under Mike Russell.

Rajitha’s life soon began to change. She participated in State events and started winning medals. Her high point came in the Khelo India Youth Games in Guwahati, where she won another crucial medal. She is now part of the Centre of Excellence and was recently a member of the Indian relay team in Nairobi, announcing her arrival.

She might be training under Dronacharya coach Nagapuri Ramesh in Hyderabad now but it is at her own expense. “A gentleman named Nagendra donates Rs 10,000 per month to keep me going. I pay 6,000 as house rent and the rest is needed for my food. It is a struggle,” she said. 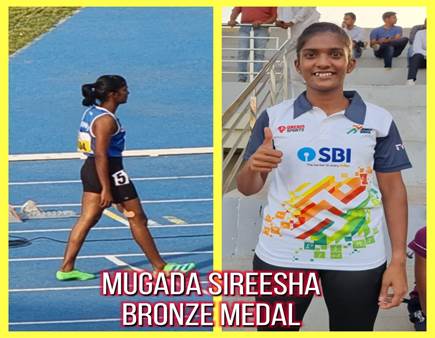 Sireesha, from Mandarada village in Srikakulam, is another story that will bring tears to

anyone. Her father Krishnam Naidu, a labourer, met with a fatal accident in 2019. Since then, her mother Gowri took over the labour work.

“Despite the sudden demise of my father, my mother insisted that I continued my career as an athlete. For a long time, two meals were a luxury for us,’’ Sireesha, who was in tears after winning the bronze medal, revealed.

Fittingly, it was her father who had encouraged Sireesha to take up athletics when she was 14 years. “This is my first medal in the Khelo India Games after a not so good show in the first Khelo Games.”

She thanks her stars that her father had at least seen her win a gold medal in the Junior National Championships in Tirupati in 2018. The delight in his eyes made me even more determined to do well,” Sireesha, who also trains under Ramesh in Hyderabad as a SAI Academy trainee, said.

Eighteen-year-old S Pallavi is another story of triumph over adversity. The girls 64kg gold medallist in weightlifting is the daughter of a mason labourer in Kondavelagada, Vizianagaram district (Andhra Pradesh). Together, they overcame all the odds, with her father Laxmi Naidu working extra hours for her daughter’s diet.

“I can’t tell you what all my father has sacrificed for me. Today, I dedicate this medal in his honour,’’ she said.

These three girls from Andhra are champions in the truest sense.

From training in her father’s farm to winning Khelo India silver, Maharashtra’ s Kalyani Gadekar has come a long way