From training in her father’s farm to winning Khelo India silver, Maharashtra’ s Kalyani Gadekar has come a long way

A mud pit that doubled up as a makeshift wrestling arena in her father’s small farm became the perfect training ground for Kalyani Gadekar. It doesn’t mean that the Maharashtra wrestler, the 53kg silver medallist at the Khelo India Youth Games 2021, was born with a silver spoon in her mouth.

It is just that her father didn’t have a choice. A wrestling fan, Pandurang Gadekar wanted young Kalyani to become a wrestler. But their tiny village called Jaipur in Washim district of Vidarbha didn’t have a single coaching centre.

“My father somehow collected soft gymnastic mats and put a bedsheet over them to give me a feel of playing on wrestling mats,” she laughed. 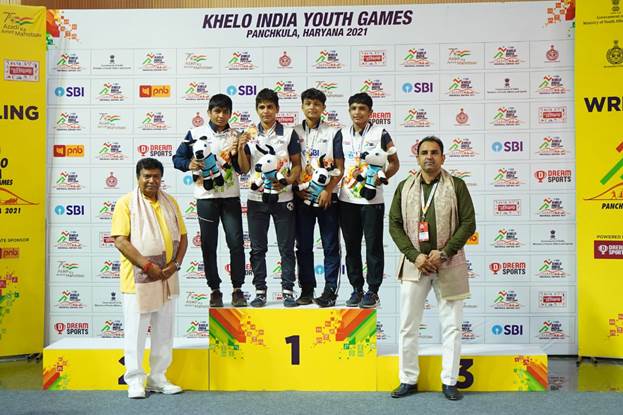 The father and daughter tango didn’t end with the emergence of the makeshift wrestling arena, though. Pandurang even had to don the mantle of coach and trainer because there were no coaches in their district, despite the state producing innumerable national and international winners over the years.

Their partnership ended when Kalyani made it to the School Nationals in her very first attempt. Her parents then sold a part of their land to shift her to Sonepat for further training.

“My younger brother and sister continued to train in the same mud pit when I switched towns. We used to have a lot of fun as kids,” Kalyani recalled.

Incidentally, now, the three siblings all train at the Sports Authority of India’s National Centre of Excellence in Mumbai.

The 18-year-old Kalyani has clearly come a long way since her initial training, winning the 53kg silver here on Wednesday.

It wasn’t easy though. Twice, she came from behind to beat Punjab’s Manjeet Kaur in the semifinal. But she ran out of luck in the gold medal bout, unable to stop the juggernaut of Haryana’s Antim.

“I am happy with my performance though. I normally compete in the 50kg category. But as there is the 49kg category here, I had to move up to the 53kg class. I couldn’t cut my weight down in such a short time,” Kalyani, who had won a silver in the KIYG Pune edition too, in the 46kg category, explained.

About a year ago, she got selected to train at Kandivali, Mumbai, under the SAI scheme, and has been working with coach Amol Yadav on her tactical game.

“She is physically very strong and used to be very defensive due to lack of proper coaching. But we are working on that and I am sure we can see a major improvement in her performance over the next 6-10 months,” said Yadav.