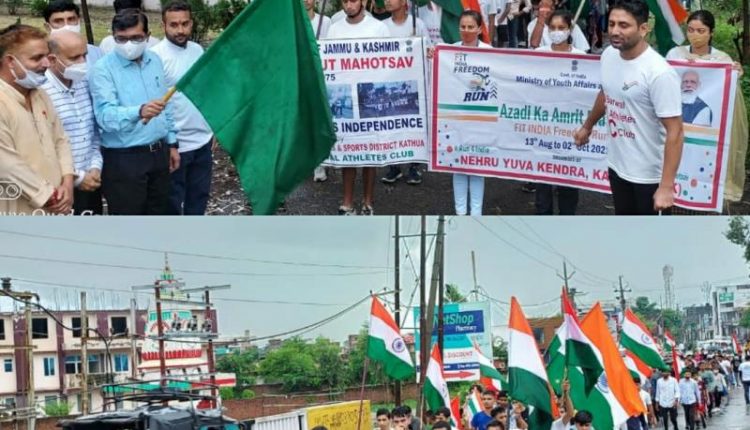 The freedom run witnessed participation of 250 Youth associated with Barwal Athletic Youth Club Barwal and over 45 other Youth Clubs and Mahila Mandals.

While speaking on the occasion, DC Rahul Yadav appreciated the participating youth for showing enthusiasm and motivated them to take part in sports to stay physically and mentally. He appealed to them to play an active role in eradicating drug abuse from society. He called upon the participants to be ambassadors of Fit India initiative and add people of all ages in fitness activities in their respective villages and areas. He said the objective of FIT INDIA is to encourage people to take up fitness activities such as running and sports in their daily life.

Earlier, the participants were administered a pledge by President Barwal Athletic Club Ranjeet Singh Pathania, followed by recital of the National Anthem.

Pertinently, to commemorate 75 years of Indian Independence Prime Minister while inaugurating the curtain raiser of “Azaadi ka Amrut Mahotsav” on 12th March 2021, said that “The celebrations can be divided in five sub-heads – Freedom struggle, Ideas at 75, Achievements at 75, Actions at 75, and Resolve at 75” to celebrate progressive India and its glorious history, culture and achievements.

Harvesting of Bhindi for Seed Purpose begins at JPAE Farm