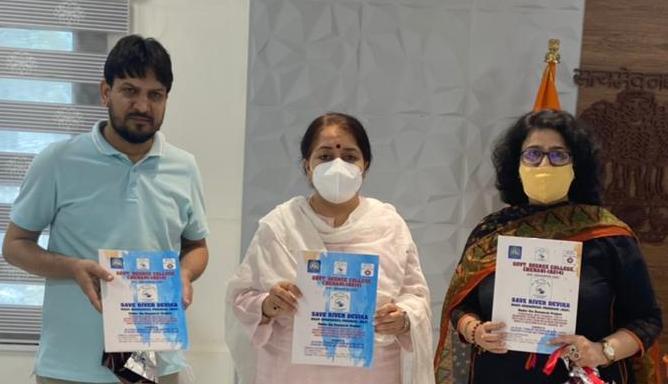 The pamphlet has been complied as the part of the research project being conducted by the College under the title, “Hydrochemical Impact Assessment, Study of Anthropogenic Pressure and Mass Public Awareness on Protection of Devika Stream and Adjoining Underground Sources of Water (Bowlis) at District Udhampur, J&K” sponsored by the J&K Science, Technology and Innovation Council (JKSTIC), Department of Science and Technology, Jammu/Srinagar.

Speaking on the occasion, the DC highlighted the importance of river Devika as lifeline of the region with religious and historical significance. She highlighted the developmental works being executed for pollution abatement of river Devika and Tawi project under National River Conservation Plan (NRCP). “The Devika Rejuvenation Project undertaken by the Government has acted as a catalyst and provided impetus to the cleanliness drive which has become a revolution in itself as more and more people are coming forward to help in various ways to clean the river Devika” she added.

Dr. Pragya Khanna, the Principal Investigator of the Project and Principal, GDC, Chenani exhorted that the main purpose of the Research project is to make Devika River pollution free and to bring its pristine glory back. She said that it was a matter of great pride for the Institution to join hands with the district administration in this big venture by way of this research contribution on the River and its adjoining Bowlis.

Earlier, the Deputy Commissioner appreciated the efforts of Dr. Pragya and students of GDC, Chenani in taking the initiative to create public awareness and to educate the masses on the importance of water bodies and their protection as a measure of sustenance of life while highlighting the critical state of pollution faced by Devika at present and to assist the district administration in reaching the goal of its rejuvenation in the larger public interest.