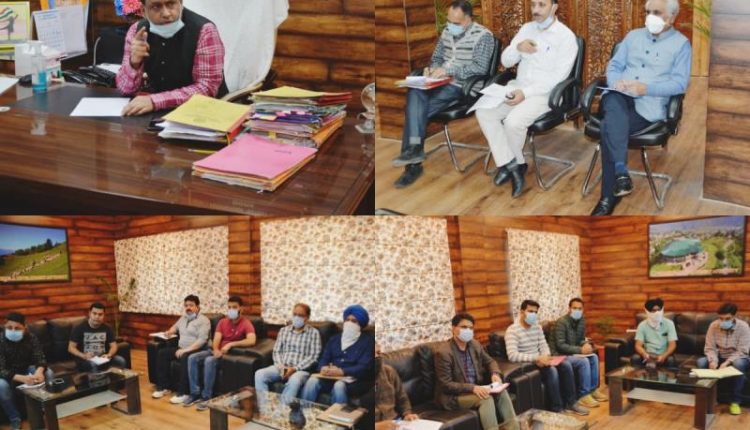 Doda: District Development Commissioner (DDC) Doda, Vikas Sharma today chaired a meeting of key officials of executing departments as well as executing agencies to review the physical, financial progress of work on Government Medical College campus and allied buildings, besides bottlenecks, if any.
The DDC sought component wise information including establishment of dedicated receiving station at GMC, Creation of 630 KVA electric substation at Associated Hospital to cater to the power supply to manifold oxygen supply, as well as Oxygen Gas Plant, establishment of separate water supply facility at GMC Doda. He also took stock of the tendering process of the works.
The DDC has been apprised that regarding creation of dedicated receiving station at GMC the land which was already identified by the STD earlier has been transferred, now the NOC has to be receive from CE STD for further transfer to GMC and the tendering process has been already started by the concerned, for which the DDC directed the concerned to get the NOC and to simultaneously start the work as early as possible so that it shall be completed before the deadline.
Regarding establishment of OGP and Manifold oxygen supply, the mechanical department apprised the DDC that manifold oxygen supply work has almost completed and with regard to creation of 630 KVA sub station at AH GMC for the smooth functioning of OGP the tender has been floated and by the end of April the work shall be started, as soon as the PWD department shall complete the construction of OGP hall.
With regard to the establishment of separate water supply scheme, the DDC has been apprised by the PHE authorities that initially the tender was bifurcated, but it has now been decided to club the tender document, for which the DDC directed the concerned to complete all the documentation and to start the tendering process by coming Monday covering all the required components and also directed to expedite the work for the hassle free completion.
The DDC also asked the Principal GMC to take up other micro works regarding internal arrangements in advance so that there shall be hassle free functioning of the institution.
Moreover, the DDC directed the EX EN to prepare a pert chart of each work as per the completion timeline and to review the material availability on daily basis, besides to mobilise the men and machinery in sufficient manner so that the iconic project shall be completed by the end of June this year on priority basis.
Later in the meeting, the DDC also reviewed the Covid-19 situation in the district, including status of vaccination and testing, present active cases, besides took stock of the implementation of appropriate measures across the district.
The DDC directed the CMO to expedite the RTPCR testing of vulnerable shopkeepers in the market places, besides asked the concerned to expedite the random sampling at Assar.
With regard to the testing of JNV and KV contacts, the DDC directed the CMO to complete the line listing and to ensure testing of each by coming Monday.
Directions were passed to ACR to mobilise all the executive agencies to intensify checking in the areas, especially in towns and market areas and to put penalties upon all the violators found in violation of necessary protocols such as wearing of face mask, maintenance of social distancing etc.
While reviewing the progress of vaccination, it has been apprised the DDC by the DIO that till now 45924 people have been vaccinated, out of which 37004 got first jab and 8920 received second jab too.
The DDC directed the concerned to get the required doses from the higher up on daily basis so that there shall be continuity in vaccination, besides asked the concerned to mobilise their men and resources to curb the surge in effective manner.
The meeting was attended by Principal GMC Doda, CPO Doda, ACR Doda, CMO Doda, Ex En PWD, PDD, Mechanical, DIO, besides other concerned officials.

iednewsdesk Jun 23, 2022
Nineteen projects developed by Swinburne staff that support new approaches to learning and teaching have been…

University of Wollongong: UOW to conduct study on the pandemic…