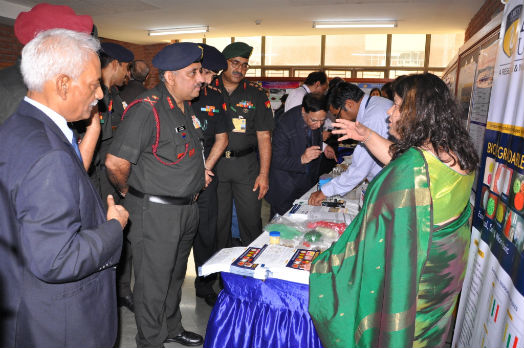 New Delhi: Army is striving to contribute to Hon’ble Prime Minister’s “Make in India” mission by connecting with academia and industry directly. As a significant step in this direction, a high level Delegation from Army under the leadership of Maj. Gen. A K Channan- SM and ADG, Perspective Plan (PP), Army Headquarters visited Amity University Campus, Sector-125, Noida along with seven Army Officers to foster close R&D linkages for meeting certain technological requirements of Army.

The visit was a follow up of technical presentation given by Dr. W Selvamurthy- President, Amity Science Technology and Innovation Foundation and Dr. M S Prasad- Director, Amity Institute of Space Science and Technology at the Army Design Bureau.

Sharing his views and applauding the technological advancements and innovative strength of Amity, Maj. Gen. A K Channan- SM and ADG, Perspective Plan, Army Headquarters stressed that in every technology demonstrated by Amity Scientists and Researchers, there is a certain very useful application for Armed Forces and expressed that Army would be keen to connect with Amity which is a renowned University for fruitful synergy in Defence Technology. He appreciated the two Credit programme “Orientation to Defence Technologies” started by Amity a week ago to orient Amity students who may join Armed Forces at “Technical Graduate Entry Scheme” or “University Entry Scheme”. He asserted that the programme may also help providing Engineers and Technologists who are already oriented to Military Technologies, for the Armed Forces, Defence Industry, PSUs and DRDO. He suggested Amity University to start a course on “Integrated Policy, Technology and Decision making in Defence” to make a considered technical policy decision by Armed Forces under the aegis of Amity Institute of Strategic Studies.

Expressing his views, Dr. W Selvamurthy- President, Amity Science Technology and Innovation Foundation stated that Amity has a fortune of having a large number of Senior Level Retired Service Officers, DRDO Scientists and brilliant research Scholars and Scientists across the country. It is very rare to have such an integrated Innovation strength to contribute to the Armed Forces in the area of building revolutionary technologies, strategic Planning and Human Resource Development. He asserted that Dr. Ashok K Chauhan- Founder President, Amity Group is very keen to augment Amity’s contribution to Defence technologies, under “Make in India” Policy of Indian Government. He assured that Amity will make concerted efforts to place its strength and innovation to the benefit of Armed Forces.

Army Delegation was quite impressed with the technological prowess of Amity University which is very relevant to Army and expressed their desire to harness Amity’s potential to develop military systems and equipments in partnership with Industry.

As a follow up, it was decided to have a specific interactive meeting between Army Design Bureau and Amity University.

Amity University is already contributing to the Armed Forces in a significant way by conducting a number of Training and Educational programmes such as DG Resettlement Course, Training Service Officers in Academic Management, preparing them to take positions in academic Institutions. At Amity Military Academy, all students of Amity are exposed to short military training which give them a glimpse of the rigors and adventures of military life and Amity SSB Academy which prepares the youth for entering Defence Services.