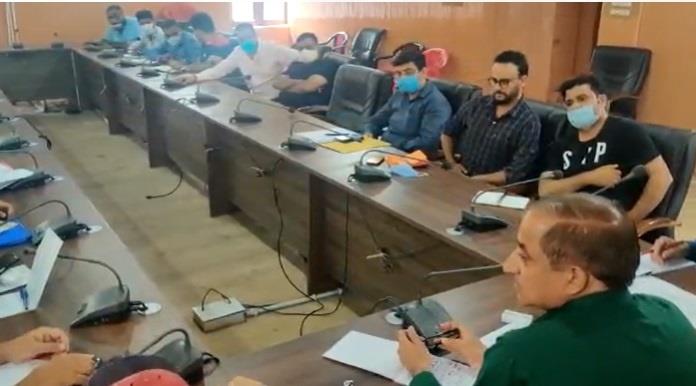 During the visit, the DG inspected the building at Dangerpora Pulwama, which has recently been allotted to the Department of Horticulture, Kashmir by District Administration.

On the occasion, he informed that a state of the art soil testing laboratory will be established in the said building, for which funds have already been released by the U.T. Government, and further added that the Laboratory will cater the needs of the orchardists of district Pulwama and adjoining areas.

The DG during the visit was accompanied by Chief Horticulture Officer Pulwama and other officers of the Department.

Later, the DG chaired a meeting at the Directorate of Horticulture Kashmir regarding implementation of the newly launched “Modified High Density Plantation Scheme”.

The meeting was attended by Chief Horticulture Officers and representatives of agencies empanelled for supply of High Density Plantation in Jammu and Kashmir.

In the said meeting the specific targets were allotted to the agencies with the instructions to complete the targets well in time.

The “Modified High Density Plantation Scheme” was recently launched by the U.T. Government in collaboration with NAFED and the scheme will remain effective for 6 years and an area of 5500 ha of land will be covered under the scheme.

It was informed that the department will publish a booklet on the scheme, which will soon be made available for the farmers of the U.T.

Training Program on PFMS held at Directorate of Agriculture, Lalmandi