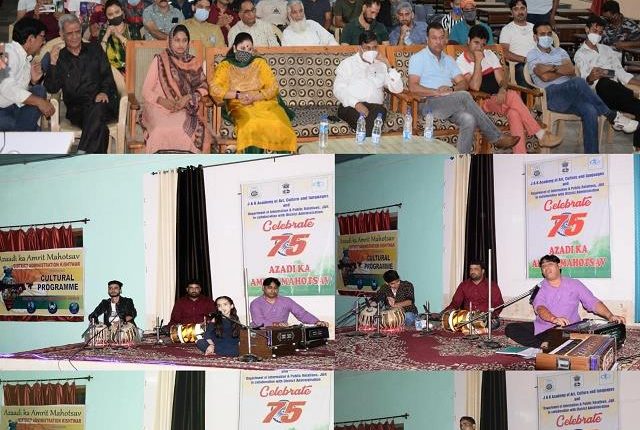 KISHTWAR : As a part of 75 week Long celebration of 75 years of India’s Independence under the aegis of “Azadi ka Amrut Mohatsav”, District Information Centre(DIC) Kishtwar, under the overall supervision of Deputy Commissioner Kishtwar Ashok Sharma, and in collaboration with the Jammu and Kashmir Academy of Art culture and Languages organised a musical programme here at GHSS Boys Kishtwar.

The musical event was held with due adherence to COVID protection protocols.

Chairperson, District Development Council, Pooja Thakur was the Chief Guest on the occasion.

The local artists hailing from the different parts of the district filled the atmosphere with the colours of music with their outstanding performances.

The Chief Guest appreciated the efforts of the Information Department Kishtwar for organising such programme and promoting the local talent.