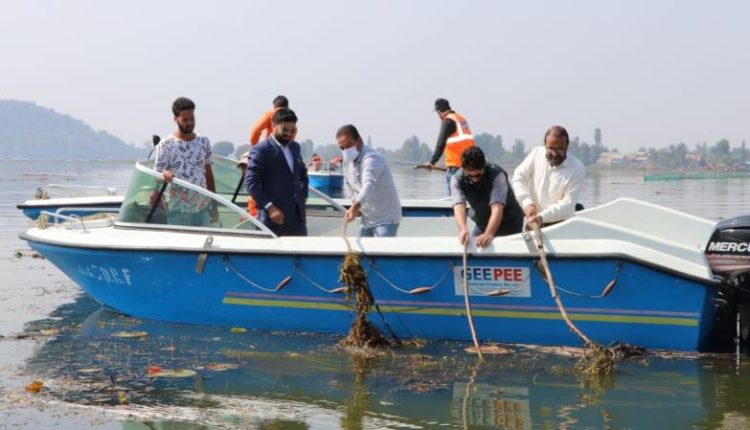 The officers were accompanied by VC, LAWDA, Dr. Bashir Ahmad Bhat and other senior officers of the LAWDA.

Besides participation in the de-weeding operation, the officers also visited the area of Dal Lake where lily extraction is being done on a large scale with the help of Pontoon based machines, an innovative method adopted for the first time for extraction of lily.

The visiting officers hailed the efforts of the LDA and hoped that such endeavours will continue in future as well.

It is worth mentioning the cleanliness drive was started on October 2, 2021 under Swachhta Pakhwada inaugurated by Lieutenant Governor J&K Manoj Sinha as part of ‘Azadi ka Amrit Mahotsav’.

In order to have greater participation in the cleaning process of Dal Lake various organizations like SRDF,NDRF,BSF, houseboat owners association, shikara association and other organizations, students and volunteers. Also SMC has been a part and parcel of this drive since its date of start. The special drive will conclude on 16th October, 2021.

Furthermore, JK Srinagar Eco Watch, GO Green are actively engaged in the cleaning operation who are also working in association with J&K LDA for de-weeding and solid waste management areas.

Meanwhile the enforcement wing of LAWDA under its special drive against illegal encroachments, today conducted a demolition drive in Rakh-e-Arth sub-division for removal of encroachments and illegal filling in Bay 16-A.

During the removal of encroachment and demolition, there was a stiff resistance by the locals however with the security assistance provided by DO Bemina the designs of miscreants were foiled. The demolition team at the occasion managed to demolish the illegally raised structures.

iednewsdesk Oct 20, 2021
The Bristol Run Series has been hailed a “major success”, as the University announced it had raised nearly £2,000…