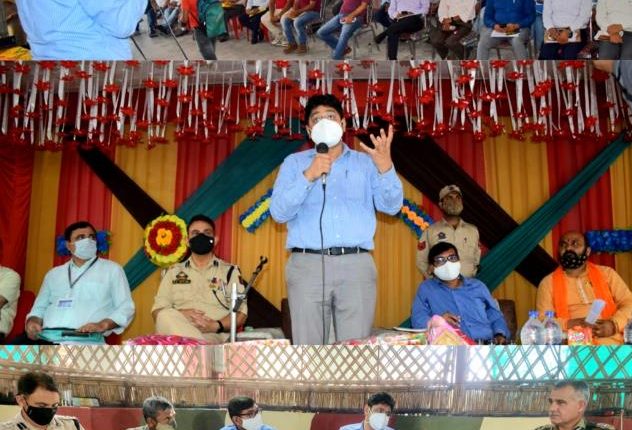 The public of the area demanded new buildings for Tehsil and Block HQ Marheen, clearing of pending liabilities under MGNREGA and B2V1 works, replacement of old electricity wires, opening of mining blocks and other related issues concerning their respective areas.

The DDC Member Marheen demanded early disposal of pending pension cases, land for a playground at Hariachak and 20 deep handpumps to cater to water supply demand of the inhabitants.

Responding to the people’s demands, the Div Com said that the Outreach initiative on Block level was aimed at to listen to the grievances of the public at their doorsteps and to facilitate early redress in an efficient manner on the basis of feedback obtained through such Camps.

Dr Raghav Langer stressed upon the officers present to be proactive and responsive towards the public grievances and asked them to assert themselves in resolving the issues of public importance. He assured the people that all their genuine demands would be processed for early redressal. The Div Com issued on spot directions to the concerned departments for looking into all the issues raised by the public for an early redressal.

On the occasion, Deputy Commissioner, Kathua Rahul Yadav and Senior functionaries of RDD, Agriculture, Horticulture along with District Officers gave a brief account of the ongoing projects, schemes alongwith present status of the demands highlighted by the individuals and deputations during the block diwas camp. The progress of taken up issues were also apprised to the concerned PRI member by the Officers of concerned departments.

Later, Divisional Commissioner held a meeting of officers of BSF, Agriculture, Horticulture and Rural Development Department, besides elected PRI representatives to discuss modalities for cultivating land near the Zero line of the International Border.

The Div. Com said that sustainable agriculture activity needs to be started on the identified land patches in the zeroline villages so that farmers can get a regular income. He directed Deputy Commissioner to constitute teams comprising representatives of RDD, Agriculture, Horticulture, Police and BSF for taking up the work on Pilot mode.

He said all the technical support must be lend to the farmers through concerned departments so that farmers of border areas can be encouraged to cultivate their land without any fear.

He also directed DC Kathua to observe zero tolerance for any encroachment in Border areas, and further directed to conduct anti encroachment drives on regular intervals.

DIG BSF N.S Jamwal also apprised the Divisional Commissioner about the status of projects taken up under BADP, land acquisition cases and status of link roads to BOP’s.