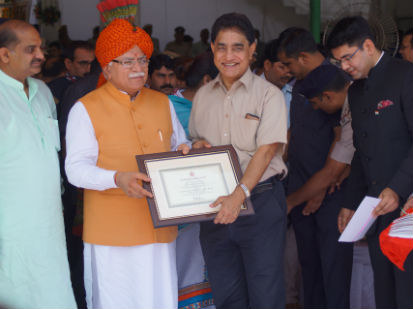 DLF Foundation was awarded for its contribution in the field of Corporate Social Responsibility. It has continued with its mission of “Building Lives” and initiated a number of charitable projects for the poor and underprivileged in areas of skill development, education, training, healthcare, community development and environment in Gurugram.

The function commenced at 8.45 AM with paying tribute to the Brave hearts of India. Thereafter, CM Manohar Lal unfurled the national flag which was followed by the National Anthem.Saluting the nation and its freedom fighters on the eve of its 71st Independence Day, CM marked the occasion by holding a unique march past highlighting the cultural diversity of India.

C.E.O of DLF Foundation Vinay Sahani said, “It is a great honour to receive award on Independence Day eve for a noble cause. We hope these initiatives make Gurugram the most livable city by year 2020. We are also in the process of launching various social and development initiatives under the banner of “Gurugram Rejuvenation Mission.”

The Independent fighters of our nation were felicitated on the occasion.The programme ended with the national anthem.