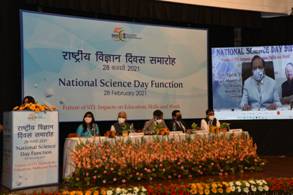 New Delhi: Union Minister for Science & Technology, Earth Sciences and Health & Family Welfare, Dr. Harsh Vardhan today highlighted how science technology and innovation (STI) would impact our future in education, skills and functioning in the post-pandemic world. He was addressing the National Science Day (NSD) funFction through video-conferencing from Imphal, Manipur. Awards to science communicators and women scientists were also conferred by the Science & Technology Minister on the occasion of National Science Day which is celebrated to commemorate the discovery of Raman Effect on this day every year. The NSD celebrations were organized by the National Council for Science Technology Communication (NCSTC), Department of Science &

Dr. Harsh Vardhan said, “The 30 percent increase in the budget of Ministry of Science & Technology and Earth Sciences put together for the year 2021-22 would provide stimulus to S&T infrastructure resources in the country”. The Union Minister said that in view of last year’s challenges thrown by the COVID-19 pandemic, the theme of the National Science Day 2021, ‘Future of STI: Impacts on Education, Skills, and Work,’ becomes all the more important.

“World has witnessed how Indian S&T systems rose to this recent unprecedented crisis caused by the pandemic. Scientific awareness and health preparedness shall become even more important in post-COVID 19 times. A comprehensive National programme has already been launched on health and risk communication with a focus on COVID-19, namely, Year of Awareness on Science & Health (YASH). We have brought out an online interactive multimedia bilingual resource for mass awareness on COVID- 19, COVID Katha,” Dr. Harsh Vardhan disclosed.

“The data portals launched today will be game changers. We feel that scientists with legacy from India should be on one platform and contribute to India’s growth story”, the Minister explained. He further said that the Prime Minister has been talking about Scientific Social Responsibility for which the Fundamental and Translational Research have to be people centric. “So on this National Science Day, let each scientist dream of something new to make perceptible difference to the life of people in India”, Dr Harsh Vardhan urged.

He also underlined the importance of sustained efforts of inculcating, nurturing, and unleashing the scientific temper and innovative mindset of projected population of 1.5 billion (+) people in 2050 for sustainable and inclusive growth.

The Minister also released the first-ever National S&T Databases on S&T Awards in India and Indian origin Academicians abroad. The database on S&T Awards in India is an excellent source of information about S&T awards presented to R&D professionals in India. The database of Indian Origin Academicians is a unique database developed in the country and has a huge information base of about 23,472 Indian academicians and research scholars working in various countries. Dr. Harsh Vardhan also conferred an appreciation shield to National S&T database developers.

Speaking on the efforts of the Department of Science and Technology (DST) in driving STI as a tool for the growth and development of the country, Secretary DST Prof. Ashutosh Sharma said that science and technology has a critical role in creating ‘Atmanirbhar Bharat’, which is ready for the future. “Future of STI is going to impact us in every aspect of life. Recalling our glorious past will show us the light to take us to future. There are huge challenges, like sustainable development, climate change, clean energy, rise of intelligent machines, and so on. The future is multi-disciplinary, and in order to solve problems, one has to approach them in an interdisciplinary manner. The job of scientists is to help reach science to every corner of the country”, he pointed out.

Dr Shekhar C Mande, Secretary, DSIR and DG, CSIR, highlighted the contributions of the Indian scientific community during COVID-19 pandemic. “The pandemic has shown that the Indian S&T community is ready for facing all the challenges like the recent pandemic and those that may come in the future,” he said.

Dr. Gargi B Dasgupta, Director, IBM Research India, and CTO, IBM India and South Asia, Bangalore, India, delivered the special lecture on the theme and said that fourth industrial revolution is creating demand for new skill sets displacing existing jobs as well as giving rise to new ones. She spoke about the future of jobs and the urgency of science, highlighting the recent study by World Economic Forum (WEF) on the new emerging job clusters and the skills required for the economy of tomorrow.

National Science Day is celebrated every year on 28th February to commemorate the announcement of the discovery of the ‘Raman Effect’ by Sir C.V. Raman, for which he was awarded the Nobel Prize in 1930. The government of India designated 28 February as National Science Day (NSD) in 1986. Since then, theme-based science communication activities are carried out all over the country on this occasion.

National Council for Science & Technology Communication (NCSTC), DST acts as a nodal agency to support, catalyze and coordinate the celebration of the National Science Day throughout the country in scientific institutions, research laboratories, and autonomous scientific institutions associated with the Ministry of Science and Technology. NCSTC has supported various programmes countrywide through State S&T Councils & Departments for organization of a range of activities, such as lectures, quizzes, open houses, etc. DST also instituted National Awards for Science Popularization in 1987 to stimulate, encourage and recognize outstanding efforts in the area of science and technology communication and popularization as well as inculcating scientific temper among masses. These awards are presented every year on National Science Day. The awards consist of a memento, citation, and award money.

Argentina: 500,000 People Will Have Access to Better Water, Sanitation Services and Social Housing