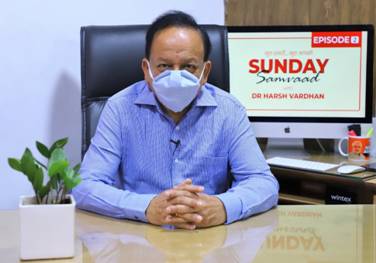 New Delhi: Dr. Harsh Vardhan, Union Minister of Health and Family Welfare answered questions posed by his social media interactors on the Sunday Samvaad platform for a second time today. These questions covered a multitude of queries concerning not only the current situation of COVID but also the government’s approach to it and related topics like India’s growth in the field of Science.

At the outset, Dr. Harsh Vardhan congratulated a responder who volunteered himself and their daughter for the Bharat Biotech Vaccine.

Speaking on the concrete measures that have been planned to handle such public health emergencies in the future, he said ‘Atmanirbhar Bharat Abhiyan’ will strengthen the nation to an extent where we will be able to overcome any eventuality including another pandemic. On 12 May, 2020Prime Minister Sh. Narendra Modi ji had announced in his address to the nation an economic package of Rs 20 trillion to tide over the coronavirus crisis and make India ‘Atmanirbhar’. Dr Harsh Vardhan emphasized that ‘Atmanirbhar Bharat’ underlines the commitment of the Government for increased investments in Public Health and other health reforms to prepare India for future pandemics.

He added that a Major proposal under consideration at the Expenditure Finance Committee level includes the following components:

· Strengthening surveillance of infectious diseases and outbreak response including that for points of entry.

Responding to a question regarding his achievement of engineering polio eradication in India, he reminded the audience that COVID Coronavirus is a novel pathogen and literature is absent on it unlike Polio. He added that India’s handling of outbreaks in the past such as SARS, Ebola and Plague will play a major role in containing COVID.The Union Minister assured another follower that no significant or drastic mutations havebeen found in strains ofSARS-CoV-2 in India (available in GISAID, global database), till now. He informed thatICMR has been conducting large-scale sequencingof nationally representative strains of SARS-CoV-2 virus collectedover the past severalmonths over differenttime-points and detailed results on mutations andevolutionof the viruswill be available in early October.

On the recent saliva-based test for COVID-19, Dr. Harsh Vardhan noted that ICMR has validated a few tests but no reliable test has been found and companies with tests approved by US-FDA have still not approached the Government of India. He added that ICMR is actively exploring this test method and will inform as soon as reliable options are available.

Being a doctor himself, the Minister answered questions on the clinical management of COVID in great detail. He dispelled myths surrounding the use of Hydroxychloroquine and Plasma Therapy in treating COVID 19. He also explained to his audience how Coronavirus becomes fatal for the elderly and the co-morbid. “Scientific evidence points towards a high viral load and development of cytokine storms among the elderly perhaps due to certain genetic polymorphism in Toll-like receptors on cells prominent among them. During the course of COVID-19, older patients can reduce their viral titers, only to rapidly descend into a state of shock involving hyperactivation of the immune system and hypercoagulation in small blood vessels.” However, he forewarned that this does not mean that a younger person cannot die due to COVID-19 though the risk of death is far lower in this case for younger people.

He dispelled fears caused by the Oxford Astra Zeneca Vaccine candidate and said that vaccine development is a complex process and that trials have been restarted only after an independent investigative expert committee gave them the permission to proceed ahead.He explained the difference between various vaccines under clinical trial in India and that since the vaccine formulations, doses, route of administration are different for the vaccines, their mechanisms of action are also different. However, the desirable outcome of each vaccine is much the same ie. ensuring healthy individuals with immunity against novel coronavirus.

Dr. Harsh Vardhan also spoke on the role of traditional medicine in the present context. He said that the AYUSH Ministry along with the Council of Scientific & Industrial Research (CSIR) and Indian Council of Medical Research (ICMR) have developed research protocols for validating the claims of various Ayush practitioners for COVID 19 solutions although no formulations has been validated as a specific drug to treat COVID- 19 till now. He added that the Central Drugs Standard Control Organization has permitted Ayush practitioners to conduct research on covid-19 and generate evidence towards development of Ayurvedic drugs for COVID-19.He assured that he would do his best to highlight the best practices of India including Ayurveda in his capacity as the Chairman of Executive Board of WHO.He said that the work that has been done in Dharavi for COVID-19 control & mitigation is already there on the WHO website for the world to see.

Dr Harsh Vardhan shared that a total of 155 families of COVID Warriors have claimed relief under the Pradhan Mantri Gareeb Kalyan Yojana. These include 64 doctors, 32 auxiliary nurse midwives and multipurpose healthcare workers, 14 ASHA workers and 45 other front line workers who lost their lives.

Dr Harsh Vardhan acknowledged that the current COVID-19 outbreak has had a significant impact on everyone’s mental health, especially so, for elderly persons who are aware of being at a higher risk. During the Sunday Samvaad, he shared several tips for the senior citizens for their mental wellbeing.

He also noted that it would take substantive time for herd immunity to develop so as to be able to cover about 70% of the population. Hence the focus of Government of India is primarily towards putting together a strategy that combines containment and hospital management.

Other than questions on COVID, Dr. Harsh Vardhan also answered queries regarding India’s plan to divert human resource to science and the role of Government Policy to achieve a clean environment witnessed during the Lockdown. Reminding the audience that India is the world’s number one country in producing engineering and science graduates every year, he said that as per the latest estimate, India has as many as 3.42 Lakh Full-Time Equivalent researchers, out of which nearly 50% are young and below 45 years, 16% are women (nearly 56,000); there has been a 40% increase in the number of researchers during the last 6 years or so; the number of women scientists also got doubled in the previous 6 years.He added that India isformulating a new path-breaking and forward-lookingNational Science, Technology and Innovation Policy which aims at not just promoting science and technology but bringing science at the centre stage and contributing to the country’s rapid economic and social development growth.

He assured the audience that the Government will be successful in achieving a clean environment like the one witnessed during Lockdown. The Ministry of Environment and Forests and Climate Change has been pursuingnumerousinitiativestoreduce air pollution in major cities due to whichair qualitylevel has shown some improvement during the recent 2 to 3 years.

For the first time, more than 12 lakh COVID tests conducted in the last 24 hrs