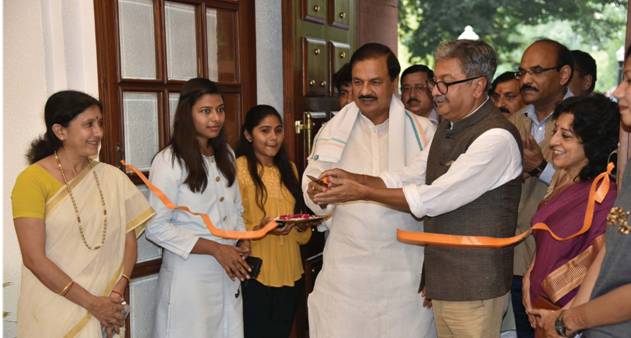 New Delhi: On the occasion of 75th Anniversary of the Quit India Movement and the Azad Hind Fauj, Dr. Mahesh Sharma, Minister of State (I/C) for Culture and Tourism inaugurated an exhibition “Quit India and Azad Hind Fauj – 75th Anniversary (1942-2017)” in the National Archives of India, Janpath, New Delhi today. Addressing on the occasion, Dr Sharma said that the ‘Quit India Movement’ was an important milestone in the Indian Freedom Movement which made the entire nation determined to attain freedom from the British rule. Millions of Indians responded to Mahatma Gandhi’s clarion call and the mantra of ‘Do or Die’. Gandhi Ji and prominent freedom struggle leaders were all arrested on 9th August, 1942. Dr Sharma said that the Prime Minister, in his ‘Man ki Baat’ of 30 July 2017, said: ‘Our young generation must know what had happened on the 9th of August 1942.’ The forthcoming exhibition is just such endeavour.

The exhibition will continue till 1st September 2017. The exhibition is based on public records, private papers, photographs, newspaper reports and proscribed literature banned by the British Government which came out during the last phase of freedom movement. Some of original papers are on display in this exhibition.

The exhibition has large digital content which can be accessed through interactive mode. The film presenting the passing of the “Quit India Resolution”, arrest of freedom struggle leaders, the role of INA and Subhas Chandra Bose is also on display.

The exhibition is spread over four sections viz:

1. The Prelude to the Quit India Movement

3. The Impact of the Movement and

(1) The Prelude to the Quit India Movement: The Section displays documents/reports pertaining to the coming of the Cripps Mission to India and its failure, Gandhiji’s description of the offer of the Mission as “post-dated cheque”. The section also depicts the All India Congress Committee resolution of 14 July 1942 at Wardha and its adoption on 8 August 1942 in Mumbai.

(2) The Actual Movement: This section includes the coining of the term “Quit India” and “Do or Die” by Yusuf Mehar Ali, besides Gandhi’s message in his own words ‘Karenge Ya Marenge – Mat Puccho Kyon’. Depicting the calendar of events, the section also highlights the role of important personalities like Sarojini Naidu, Suchita Kripalani, Aruna Asaf Ali, Ram Manohar Lohia, Jai Prakash Narayan, J.B. Kripalani and Usha Mehta (who was instrumental in setting up private radio broadcast).

(3) The impact of the Movement: The section reflects the disturbances that occurred all over the country after the arrest of the prominent leaders on 9 August 1942. The exhibits also showcase the parallel governments that were set up in different parts especially in Midnapur, Satara, Ballia, Tamluk (West Bengal) etc.

The need of the hour is not ‘Do or Die’, instead, to resolve, to come together, persevere, and work relentlessly for making a new India.