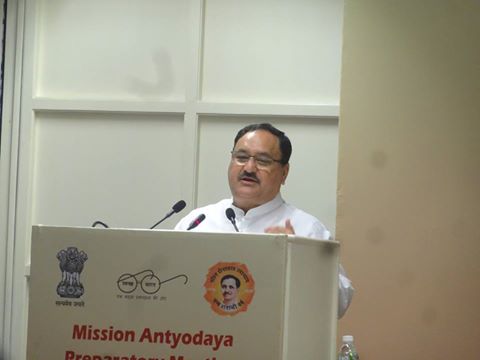 New Delhi: J P Nadda, Union Minister for Health and Family Welfare, held a high level meeting to review the activities for prevention and control of vector borne diseases (dengue, malaria, chikungunya) in the country, here today. Shri Nadda extended assurance to all States that there is no shortage of medicines, diagnostic kits, masks etc. The Health Minister further reassured the states for all possible help from the government. Highlighting the important role that the field level workers, and municipal corporations and municipalities play in control and prevention of these vector borne diseases, he directed to involve municipalities and corporations at the ground level for more effective and joint efforts.

During the meeting, Shri Nadda directed that all the available information on the measures taken by the Ministry should be easily available to the people through various media channels. Shri Nadda further stated that awareness is the key in controlling the vector borne diseases and no stone should be left unturned to reach out to the people. Noting that community participation and empowerment are the most crucial areas in prevention, the Union Health Minister urged all the stakeholders to start rigorous awareness campaigns regarding the preventive steps to be taken by the people in their communities.

Taking stock of the situation, Shri Nadda was briefed about the initiatives of the Health Ministry and was informed that Technical Guidelines for prevention and control and clinical management were developed and shared with the states for implementation. The Ministry has also conducted review meeting with the states and 14 advisories have been sent to all States as early as January this year for strengthening their preparedness before the vector-borne disease season.

The Health Ministry has undertaken the dissemination of National Framework for Malaria Elimination (NFME 2016- 2030) to all States and UTs with instructions to initiate key actions. The Ministry has also drafted a 12-point Roadmap for Malaria Elimination for rolling out malaria elimination activities in the country. Official from the Ministry have also had meeting with organized government sector (Army, Navy, Air Force, BSF, CRPF, Railways etc.) for support in malaria elimination. A National Malaria Task Force under the Union Health Secretary and a Technical Working Group under the DGHS for oversight of all malaria elimination activities in the country, have also been formed.

The Ministry has distributed/being distributed 23.5 million long lasting insecticidal nets (LLIN) and more are in pipeline. Further, eight states have successfully launched their respective plans for malaria elimination and other states/ UTs are in process of finalizing their action plans for elimination. The Ministry has also requested the States/UTs to declare Dengue as notifiable disease for improving reporting and for taking preventive measures in the affected areas. Till date, 13 States/UTs viz., Chandigarh, Delhi, D&N Haveli, Goa, Himachal Pradesh, Karnataka, Kerala, Maharashtra, Manipur, Odisha, Punjab, Tamil Nadu, and UP have declared dengue as a notifiable disease.

Under the guidance and direction of the Union Health Minister, Government of India has initiated several awareness programmes through print and electronic media for controlling these diseases. Besides, for sensitization of the masses on the subject, the National Dengue Day was celebrated on 16th May, 2017.

The Union Health Ministry has already provided all logistical and technical support to the States including Delhi in terms of surveillance and diagnostic kits to strengthen their efforts in addressing Dengue and chikungunya. The Health Minister also directed the officers to conduct regular supervisory visits to the States and various hospitals for assessing the situation, preparedness and to provide on the spot technical guidance to the health authorities. He also directed the officers to be vigilant and monitor the situation in the northern states including Delhi as vector borne diseases increases.

NCERT launches its Web Portal for supply of NCERT Textbooks