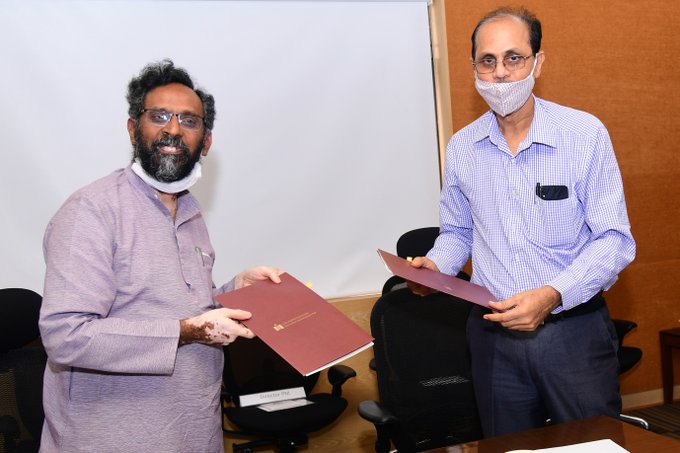 Hyderabad: Defence Research and Development Organisation (DRDO) is going to establish a Research Cell at Indian Institute of Technology Hyderabad to meet the future defence technological requirements of the country. The ‘DRDO – IITH Research Cell’ will undertake basic and applied research programs in identified technology areas.

Being established as an extension of the DRDO Research and Innovation Centre (RIC), Chennai, the Research Cell is envisaged to become a Centre of Excellence in conducting scientific and applied research in advanced technologies for defence.

The MoU was signed during a virtual event organized at the DRDO DG-MSS Office in Hyderabad on 3rd July 2020 in which officials from DRDO and IIT Hyderabad participated.

Highlighting the role expected of ‘DRDO-IITH Research Cell,’ Dr. G. Satheesh Reddy, Secretary, Department of Defence R&D and Chairman, DRDO, who addressed the event through video conference, said, “This MoU is aimed at bringing together the capabilities of DRDO and IIT Hyderabad, in order to achieve greater heights in indigenous technology through collaborative research. This DRDO-IITH Research Cell will ensure seamless execution of different projects between DRDO and IITH. IITH has a strong research base in advanced technologies, which will be strengthened for the growth of the country through this cell.”

The DRDO-IITH Research Cell will enable tapping knowledge resources in Basic Science and Technology Industries that are interdisciplinary in nature and spread across multiple institutions. The Research Cell will help enhance the scientific and technological base of the country in critical defence technology areas. This directed Research initiative will help India become self-reliant in select defence technologies

Addressing the event, Prof. Bhaskar Ramamurthi, Director, IIT Madras, said, “IITM shares a special bond with IITH from its birth. We are also happy that Prof. Murty, who is also an Institute Professor at IITM, is leading IITH. I am sure that DRDO-IITH Research Cell will make headway with its breath-taking deliverables under the umbrella of RIC, Chennai, with strong collaboration between DRDO Scientists and IITH Researchers.”

The Research Cell will facilitate directed basic and applied research by engaging faculty and researchers at academic institutions, technology centers and other renowned institutes in the country through defined research programs based on their research capabilities.

Thanking the DRDO for choosing IIT Hyderabad to set up the Research Cell, Prof. B.S. Murty, Director, IIT Hyderabad, said, “Research is always a prime focus at IITH. It is indeed a pride moment for IITH to get associated with DRDO with the establishment of DRDO-IIT Hyderabad Research Cell. This cell will support various research areas at IITH that can not only focus on fundamental science but also can bring out indigenous technologies and solutions through strong collaboration with scientists of DRDO.”

The Thrust Areas of the Research Cell includes

After the event, DRDO and IIT Hyderabad officials also planted saplings at the DRDO DG (MSS) office in Hyderabad.

IIT Guwahati introduces the first-of-its-kind course on UN-Sustainable Development Goals 2030 as part of the B.Tech curriculum