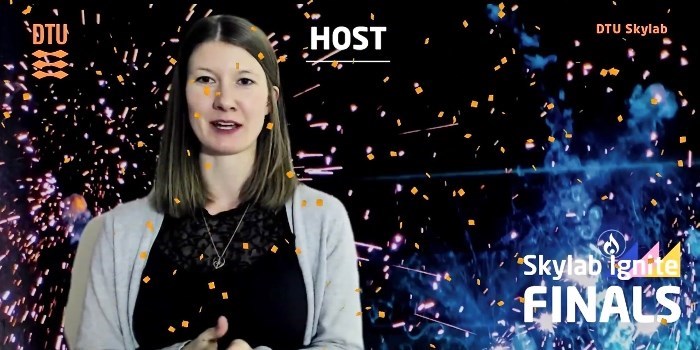 The student start-up Reel receives DKK 200,000 to develop a solution that can promote green transition in small and medium-sized Danish businesses.
The student start-up Reel won the largest prize of DKK 200,000 at the final of DTU X-Tech on DTU’s Innovation Day. Reel was awarded the prize for its work in providing green energy for small and medium-sized businesses through Power Purchase Agreements (PPA)—which are long-term agreements between an energy buyer and an energy provider.

The main prize in the X-Tech Entrepreneurship course is funded by the venture fund PreSeed Ventures, which provides support for early entrepreneurial projects, and was awarded to Reel by former Minister for Higher Education and Science Tommy Ahlers, who participated in the final.

“You have developed a fantastic product, and we’re actually working with these issues in our negotiations of tomorrow’s energy market. A PPA is an instrument that will be used more and more, but right now it is not on the market, so I see a clear demand for your product, and I’m convinced that you’ll have a great future ahead of you,” said Tommy Ahlers.

Marianne Thellersen, Director for Innovation and Entrepreneurship, Senior Vice President at DTU, followed the live transmission of the Innovation Day and was impressed by the energy displayed by the students.

“The students have been absolutely amazing at finding solutions during the corona pandemic. It’s very encouraging to see that 150 students have completed X-Tech Entrepreneurship—despite the restrictions imposed—and we have had seven of the most promising early start-up projects in the finals of the Skylab Ignite competition. It’s an impressive result,” says Marianne Thellersen.

Dragons’ Den
The X-Tech final, designed as a Lion’s Den concept, was held in compliance with strict coronavirus restrictions, so all spectators and external partners had to follow the event day via a live LinkedIn broadcast.

In order to ensure the best possible assessment of the individual innovation projects, each team—wearing face masks and with sanitised hands—was allowed into DTU Skylab’s Auditorium. Here, the students presented their prototypes and their business plans for five judges placed in a marked green box. The themes for this year’s X-Tech Entrepreneurship course were water, food and agriculture, eHealth, AudioTech, and Deep Tech.

Following the presentation from a total of 28 teams from the autumn semester, three new finalists, BioBased Adhesive, Hooligone, and Diasense, and the semester’s best tech demo, AQfeed, were named. The event was strictly choreographed using green tape at DTU Skylab’s Arena. The premises are usually approved to accommodate 349 people, but due to the restrictions, only the spring finalists, former Minister for Higher Education and Science Tommy Ahlers, head of course Thomas Howard, Martin Glesner from Otto Bruuns Fond, and a few technicians were present.

DKK 35,000 for their heat-sensitive sensor that can warn about crop fires during harvesting.
The runner-up prize of the year and the accompanying DKK 15,000 went to the EasyWheels project and IA-based wheelchair control and safety system.