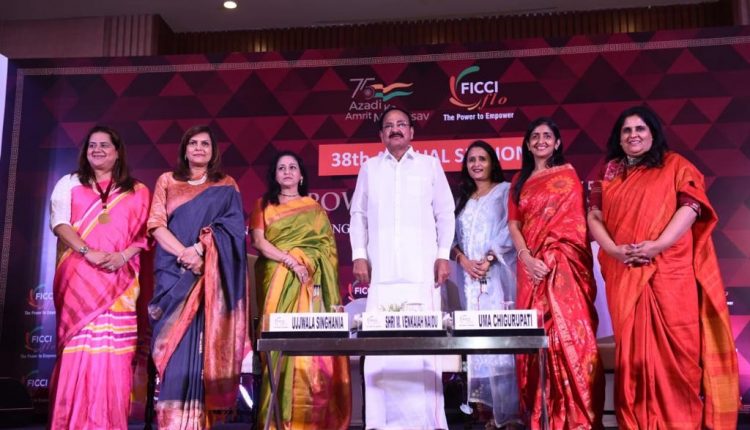 EDUCATION, EMPOWERMENT AND PROMOTING ENTREPRENEURSHIP AMONG WOMEN IS CENTRAL TO ACHIEVING INCLUSIVE, EQUITABLE AND SUSTAINABLE GROWTH OF THE COUNTRY –  M.Venkaiah Naidu , Vice-President of India.

New Delhi: Empowerment of women and youth is central to achieving the objective of inclusive, equitable and sustainable development and it is not only a national goal but also a global agenda.

“It is beyond doubt that given the right opportunities and proper environment, women have excelled in different spheres of life. There is a strong need to create suitable conditions to facilitate and encourage women to have full, active and unhindered participation in social, economic, political and public life so that their potential is realized fully for the benefit of the society” said M.Venkaiah Naidu, Vice President of India while inaugurating a Two day 38th Annual session of the FICCI Ladies Organisation (FLO), the women business wing of apex trade body of FICCI .

“Lack of equal access to education & employment, inequalities  remain the key barriers to their advancement. Saying that gender disparity hinders women’s empowerment and their integration in mainstream. We need a major shift in our mindset which would lead to a positive attitude towards women and their role in society.” The Vice President said

“Women’s active participation in decision-making has a positive impact on education, health, nutrition, employment and social protection. Women’s empowerment has a multiplier effect not only on their own lives but also on the family and the society”  he added

“As women play an increasingly important role in taking the country forward, FLO is best positioned to play the role of a catalyst in bringing about a transformation and shaping the future of our country. Hence the theme for our 38th Annual Session – “Empowering India @75-Women transforming India through Industry, Trade, and Innovation” Said Ms Ujjwala Singhania, the outgoing President of FICCI Ladies Organisation (FLO) speaking on the occasion.

“ For  promoting  entrepreneurship and empowering women cross the nation  FLO has  launched the all women FLO Industrial Park at Sultanpur, Hyderabad.   It is a first of its kind in the country. It has signed an MoU with Government of Madhya Pradesh for setting up all women Industrial park in Bhopal and Indore. Another park is to come up at IT city Bangalore .These industrial parkes will be 100 percent owned by women. Through the FLO Women Directors Initiative, we have trained over 100 women to be taken on boards and being accepted at the leadership position.” She added.

“ FLO’s vision for the year was to promote industry, trade, and Innovation for women. We have taken up a number of events and Initiatives across India in this direction. Besides these, FLO believes in the power of women and the youth to change their own lives, their communities, and the world for the better. FLO continuously strives to empower grassroots women and youth

to create a more developed nation.” Said the incoming President Ms Jyanti Dalmia while speaking on the occasion .

Loughborough University: University launches podcast about the impact of Putin’s invasion of Ukraine

University of Strathclyde: Workforce of the Future make a promise to Planet Earth at the launch of the Newton Flight Academy