New Delhi: The Education Worldwide India Leaders Conclave & International Students Fair 2018 in New Delhi concluded with the core focus on ‘Study in India’. The conclave was a robust platform for all important stakeholders in the education industry to debate on the major current trends in the education sector- Globalisation of education and innovation in education both from the point of view of technology and infrastructure. The conclave also shed light on the importance and difference between Universities/institutions ranking & ratings in the education system. In the side-lines of conclave, an international education student fair was also organised that witnessed participation of more than 900 students across the country. The event was inaugurated by Chief Guest Dr. Anil Sahasrabudhe, Chairman – All India Council for Technical Education (AICTE) recently at Hotel Le Meridien, New Delhi. The conclave was exclusively supported by Federation of Leaders in Academics, Research and Education (FLARE) & Indian Education Network (IEN).

The All India Survey on Higher Education 2016-17 says that while about 5 lakh students travel abroad to pursue higher education, there are just 47,575 students of foreign nationalities studying in Indian universities. Aiming to increase the inflow of foreign students to Indian universities, the union human resource development (HRD) minister Prakash Javadekar, on Friday, announced April 18 as the launch date of the Study in India programme. Government of India’s new mission for Study in India programme is to bring 10 lakh foreign students into the country.

Speaking about the importance of Internationalisation of education at the conclave Honourable Chief Guest Dr. Anil Sahasrabudhe, Chairman – All India Council for Technical Education (AICTE) said, “India is far better than countries that are non english speaking when it comes to education. The country of our size where we have about 800+ Universities,

40,000+ Colleges and 10,000+ Technical Institution, I think we have a huge potential to attract students from all over the globe. This isn’t the case long ago, when universities like Nalanda attracted students from all over the world. The missing factor today is better quality education. As far as the cost of education is concerned. it is less as compared to most of the countries. And if quality of education is improved I am sure we can attract lakhs of students within sometime. There is already a project by govt of India MHRD to attract student from abroad. One of the program launched year and a half ago is named GIAN- Global Initiative of academic networks under which foreign faculty from any university can be invited to an Indian institution for a week or two. The expenditure will be taken care by the HRD Ministry. About thousand faculties from different part of the world have been visiting different institutions in India. In these one or two weeks of crash courses these faculties learned about our education system and found it very valuable for the global education.”

The first session ‘Internationalisation of Indian Education to attract International Students’ was moderated by Prof. B.S. Satyanarayana – Vice Chancellor, BML Munjal University (BMU). Joining him as penalists were Mr. Kunwar Shekhar Vijendra – Chancellor, Shobhit University, Dr. Vijay Khare – Director International, Savitribai Phule Pune University, Dr. Palak Sheth – Director Planning & Development, Pandit Deendayal Petroleum University (PDPU). The discussion at the session revolved around getting international faculty from all over the globe as it will give international weightage and help to attract students. The topic highlighted that Government colleges & universities still have some restriction to hire foreign faculties but other self-financed private universities should use this method to attract students from abroad.

institutes should be done by accredited 4-5 bodies. It will be important to ensure that the basic parameters and the evalution criteria for the rating agencies should be same so that the institution that are participating in different agencies gets the score under same parameters. It will help the students with better and transparent information while choosing the right university / institution.

· By the time that happens there has to be changes in Course, curriculum, use of technology to empower teachers, education with practical examples & should inculcate activity-based education 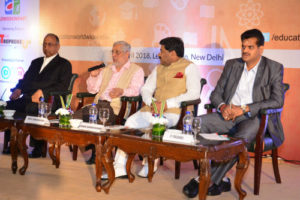 Speaking at the event Mr. Siddharth Jain, Chief Strategy Officer of Education Worldwide India said, “Outbound mobility among Indian students has increased over the past few years. India is the number two senders to several top and emerging education destinations, including the U.S., Canada, and Australia. According to data from a number of sources, seven top and emerging destination countries – including the United States, Canada, the U.K., Australia, China, New Zealand, and Germany – collectively saw Indian enrolments rise 103 percent between 2005-2018. Being in the education industry for last 15 years, data revealing facts like around lakhs of Indian students going abroad to study and only handful (around 47,575 thousand) coming to study in India was a matter of concern. Back in 2005 we started working towards reversing the situation by tapping students from mainly ASEAN, SAARC, African and West Asian countries. Our continues effort of highlighting Indian education in the foreign countries has been doing tremendously well as we can see the outcome. Government has also been making several reforms like “lucrative fee waivers” to foreign students to promote study in India. Education Worldwide India Leaders conclave & international students fair 2018 is our first effort this year where the educationalists, leaders of institutions, academics and researchers from around the world came together to discuss major topics pertaining to Study in India. I am glad to see the overall response. We shall be coming up with the next edition very soon.”