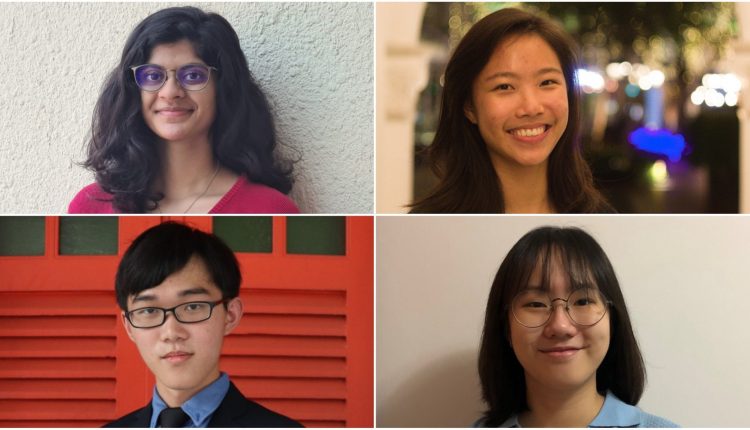 The Department of English Language and Literature at the NUS Faculty Arts and Social Sciences will be awarding the Edwin Thumboo Prize 2021 to four pre-university students for their exceptional performance in the study of literature.

Named after one of Singapore’s most prominent poets and the Department’s Emeritus Professor, the Edwin Thumboo Prize seeks to encourage excellence in the study of Literature at the pre-university level by recognising outstanding literary works by A-level and International Baccalaureate (IB) students of English Literature in Singapore. Established in 2019, the annual Prize is administered by the Department with support from the Ministry of Education (MOE), and is funded by generous donors including patrons of the arts and former winners of the Angus Ross Prize.

The joint winners of the Edwin Thumboo Prize 2021 are Ms Suneeti Sreekumar from National Junior College (NJC) and Ms Wong Shao-Yi from Raffles Institution (RI), who will each receive a monetary award of $200.

Ms Sreekumar’s essay explored the themes of inadequacy and the quest for affirmation in J.M. Coetzee’s Age of Iron and Edward Albee’s Who’s Afraid of Virginia Woolf?; while Ms Wong’s essay examined the liminal qualities of sleep and imagination in Shakespeare’s The Tempest.

The winners were thrilled and honoured to have won the award, and thanked their teachers, parents and friends who inspired and motivated them in their love for literature.

Ms Sreekumar said, “I owe it all to my parents for impressing upon me, from a young age, the value of reading widely and also for supporting all my endeavours. I have always been surprised by Literature’s deceptive simplicity and how it has taught me many life lessons.” She also thanked the NJC English and Language Arts Departments, particularly her teachers, Ms Carmen Ng, Ms Sylvia Soh, Mrs Marianne Tan, Ms Eleanor Neo and Mr Chua Chin Yang for fostering her love for the written word across six years of studying literature.

Ms Wong expressed her gratitude to her teachers at RI, Ms Lye Su Lin, Mrs Nicola Perry and Ms Melissa Tan, sharing “They taught me to appreciate the poem, the play, the novel, in all their beauty and they helped me to grow into a more confident writer and perceptive reader. Most of all, they put their faith in the earnest dorky kid who loved and will always love literature. I can’t thank them enough. I’m also thankful to my parents for reading to me before I could and reading next to me ever since then. Every family has a special place and I’m so glad my parents made ours the bookstore.”

Two Merit Prizes will also be awarded to Ms Elise Lauw from Temasek Junior College and Mr Nyang Ying Zhi from Hwa Chong Institution. They will receive monetary awards of $100 each.

The Edwin Thumboo Prize winners were selected through a rigorous process. The competition attracted entries from 12 pre-university institutions, including those offering the IB Diploma Programme.

Candidates were assessed by a selection panel, comprising representatives from NUS and MOE, as well as former Angus Ross prize-winners. The selection panel for this year’s Prize included Associate Professor Anne Thell from the Department and the 1997 Angus Ross Prize Winner, Mr Aaron Maniam.

Said Mr Maniam, “The Edwin Thumboo Prize was established to celebrate outstanding achievements in the study of English Literature at the pre-university level; this year’s winners have truly lived up to these aims. Even being nominated is an achievement in itself, since each school is asked to nominate only their top performer. The interviews involved analysing two unseen poems, discussion of an essay submitted by each student, and an exploration of general issues regarding literature and its role in societies. While every candidate was strong, the judges were particularly impressed by our four winners’ combination of lucid analysis and deep enthusiasm for their subjects.”

He added, “Their analysis of the poems and depth of argumentation in their essays shone through. We hope that all four of the top students realise that they are working at an intellectual level that is rare even in university settings, showing remarkable agility of mind and rich, spontaneous responses in the wide-ranging literary discussions we engaged in. Their conviction, poise and rigour made them truly phenomenal and a pleasure to interview.”

Associate Professor Michelle Lazar, Head of NUS Department of English Language and Literature said, “We continue to be impressed by the quality, the range of intellectual approaches to understanding the literary texts, and the sophistication of the students’ writing and analysis. We thank our partners from MOE and the pre-university institutions for working with us to promote the study of and love for literature.”