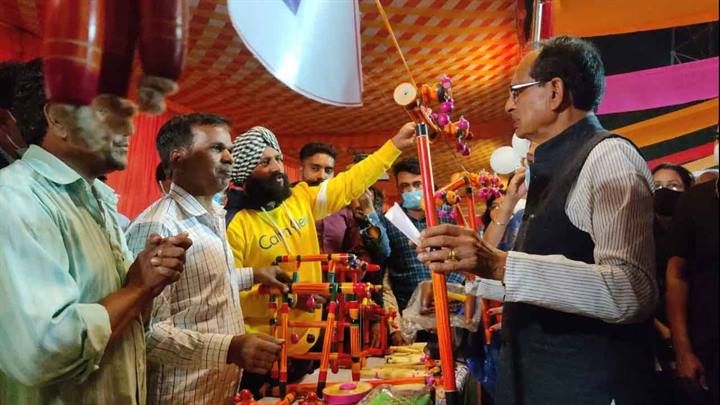 Bhopal: Chief Minister Shri Shivraj Singh Chouhan has said that efforts will be made to get GI tag to make Budhni’s toy products world famous after Budhni. Other toys will also be made other than wood by forming clusters to compete with the world market. Chief Minister Shri Chouhan was addressing the Khilaunakari Budhni Toy Festival on Saturday. Member of Parliament Shri Ramakant Bhargava, Chief Minister Shri Chouhan’s wife, Smt. Sadhna Singh and other public representatives were present in this festival, which will continue till November 14.

Chief Minister Shri Chouhan said that it has come to his knowledge that many businessmen earn more by engaging in online marketing. Some online companies sell Budhni toys for up to 5 times more price. Chief Minister Shri Chouhan said that it is his endeavor that only local artisans should do this work for which the government will prepare a network. He said that every effort would be made to get GI tag not only for toys but also for other products including wheat and basmati rice.

Chief Minister Shri Chouhan said that the toy products in Sehore district have been included in the ‘Ek Zila Ek Utpad’ scheme launched in the state on a call of Prime Minister Shri Narendra Modi. Training will be provided by making clusters for low cost of toys, finishing and necessary machinery will also be installed for manufacturing other toys.

3-day Budhni festival will be held

Chief Minister Shri Chouhan said that now a 3-day Budhni festival will be organised at Budhni on Narmada Jayanti. He said that religious events would be held at the Ghat of Narmada ji while other colourful programmes would be held at open places in the middle of Budhni.

Chief Minister Shri Chouhan said that the children of Budhni should get quality education and they should move forward. For this, CM Rise School will be opened in Budhni. Along with quality education in CM Rise School, other arrangements including modern lab, smart class, library, bus facility will be available on the lines of private schools. He said that Budhni’s children should move forward, for this one lakh, 75 thousand and 50 thousand rupees will be given to the children securing first, second, third places respectively in classes 10th and 12th. Along with this, free coaching facility will be provided to the children of Budhni region for the preparation of competitive examinations. The children who will be selected in medical, IIT, IIM, their fees will be paid by the government.

Chief Minister Shri Chouhan said that sports are also very important for the overall development and entertainment of children. Like last year, sports competitions will be organised in Budhni this year too. Apart from cricket, sports like Kho-Kho, Kabaddi, wrestling etc. will also be included. These competitions will be organised at Panchayat, Block and Vidhan Sabha level. MP Shri Ramakant Bhargava and former MLA Shri Rajendra Singh also addressed.