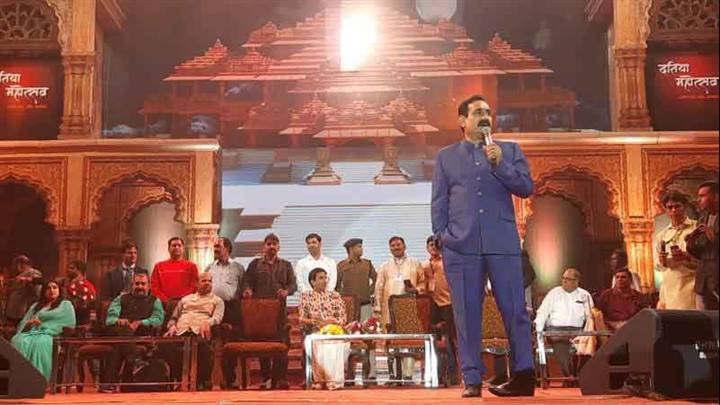 Bhopal: Datia Mahotsav, which is full of art and culture, has been organised on the desire of the public. In the programme, Saraswati putra Dr. Kumar Vishwas and other poets called upon all the listeners to shower their blessings and love. Home Minister Dr. Narottam Mishra was addressing the suave audience after inaugurating the three-day Datia Mahotsav in the stadium premises on Friday.

Eminent poet Dr. Kumar Vishwas said at the inauguration of Datia Mahotsav that Bundelkhand region lives in my heart. By the grace of Maa Pitambar-Dhumavati Mahamayi, I have come among you. Datia is the holy land of deities. Indore’s poetess Dr. Bhuvan Mohini, while offering worship to Maa Pitambar-Dhumavati Shakti Bhavani, presented her melodic songs on the inauguration of Datia Mahotsav. Poet Shri Pawan Tiwari also presented tuneful bhajans in the festival.