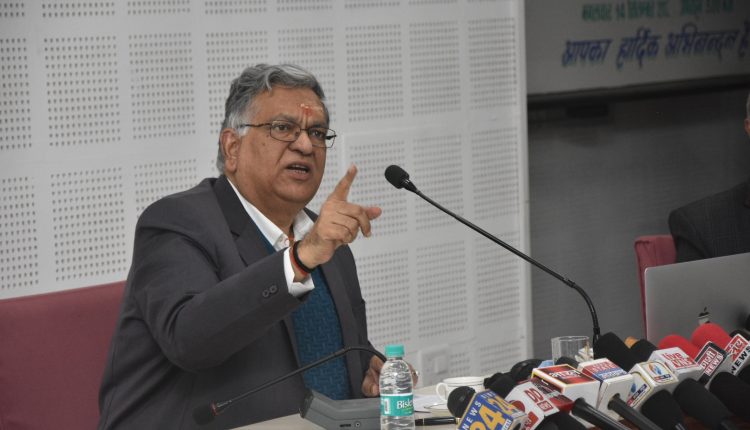 Invoking BHU founder Pt Madan Mohan Malviya’s vision of inclusivity, nobility and excellence from over a century earlier, Prof Jain, in a message to the campus community, pledged to “foster a culture of consultation, inclusivity, transparency, collegiality and mutual respect in our joint ambition to elevate this remarkable institution into the ranks of the world’s great universities.”

Students were at the “heart” of the educational enterprise, Prof Jain said, and enhancing their educational experience and community life with new curricular and co-curricar initiatives would be “the highest priorities of our faculty and my administration.”

He exhorted BHU faculty and staff to “step up individually, collectively and collaboratively to the moment” to realise the University’s potential and promise.

Prof Jain thanked BHU Rector Prof V.K. Shukla, who has been serving as officiating vice chancellor for the past about ten months, for his services and contributions to BHU.

Prof Jain most recently served as the founding director of the Indian Institute of Technology Gandhinagar for 12 years. He was conferred the Padma Shri, one of India’s highest civilian honours, for distinguished service in the fields of science and engineering, by the Government of India in 2020.

Dr Jain has made seminal contributions to earthquake engineering practice and education in India. He was instrumental in the development of several important seismic codes in India, and has trained thousands of professional engineers and college teachers in earthquake engineering through his continuing education programmes. He established the National Information Centre of Earthquake Engineering (NICEE) at IIT Kanpur and developed the National Programme on Earthquake Engineering Education (NPEEE), supported by the Government of India. He has served as consultant for several major projects, such as bridges and petrochemical pipeline, and has published more than 150 scholarly papers. His research interests include the study of damaging earthquakes, reinforced concrete buildings, bridges, and seismic codes.

Dr Jain was elected as an international member of the US National Academy of Engineering in 2021 (one of the only 18 elected from India till date) and received the Distinguished Alumnus Award from Indian Institute of Technology Roorkee for Academic or Research Excellence in 2019.

Dr Jain was on the faculty of IIT Kanpur for 35 years from 1984-2019. He holds a Bachelor of Engineering from the University of Roorkee (1979), and Masters (1980) and Doctoral (1983) degrees from the California Institute of Technology, Pasadena.