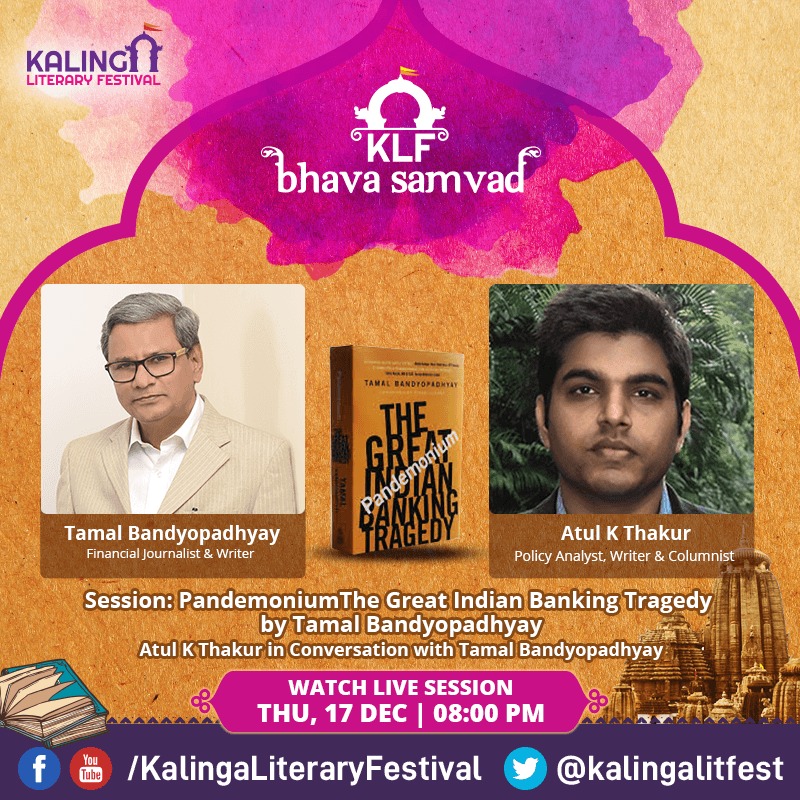 Bhubaneswar/New Delhi: The eminent business journalist of India Tamal Bandyopadhyay will be joining in conversation with writer and columnist Atul K Thakur on KLF Bhava Samvad. The session is likely to take place on 17th December at 8 pm on the official social handles of Kalinga Literary Festival.

The session will be focusing on Tamal Bandyopadhyay’s book ‘Pandemoniun- The Great Indian Banking Tragedy’. The book is a definitive insider story on the rot in India’s banking system.

A timely and insider look at dramatic forces reshaping banking in Asia’s third-largest economy, this book is a bird’s-eye view of Indian banking and also a fly-on-wall documentary. A must-read to understand contemporary India’s challenges and economic potential.

The book also features no-holds-barred interviews with four former Reserve Bank of India Governors – C. Rangarajan, Y.V. Reddy, D. Subbarao, and Raghuram Rajan. They tell you how the banking crisis spilled over the NBFC turf and threatened to snowball into an economic crisis.

For the past 25 years, Tamal Bandyopadhyay has been a keen student of Indian banking. A lifelong reporter and journalist, he is an award-winning national business columnist and a bestselling author. He is widely recognised for ‘Banker’s Trust’, a weekly column whose unerring ability to anticipate and dissect major policy decisions in India’s banking and finance has earned him a large print and digital audience around the world. The column won Tamal the Ramnath Goenka Award for Excellence in Journalism (commentary and interpretative writing) for 2017. Banker’s Trust now appears in Business Standard, where he is a Consulting Editor.

Previously, Tamal has had stints with three other national business dailies in India, and was a founding member of Mint newspaper and Livemint.com. He is also a Senior Adviser to Jana Small Finance Bank Ltd. Between 2014 and 2018, as an adviser on strategy for Bandhan Bank Ltd, he had a ringside view of the first-ever transformation of a microfinance institution in India into a universal bank.

Author of five other books, Tamal is widely recognised as a contributor to the Oxford Handbook of the Indian Economy and Making of New India: Transformation Under Modi Government. In 2019, LinkedIn named him as one of the ‘most influential voices in India’.