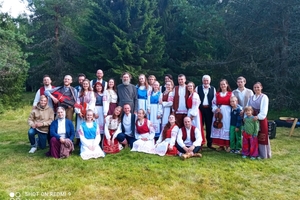 From July 21 to August 5, a creative training of the ensemble of folk music of PetrSU “Toive” in the “Vodlozersky National Park” took place.
Alevtina Voitovich, teacher and administrator of the Toive ensemble, told about the trip this year:

Since 2001, every summer the members of the ensemble “Toive” have been traveling for two weeks to the cradle of the taiga. Vodlozerie is a unique world filled with bright colors. Each trip for the team members is unique and unforgettable. Here the guys learn to live as a single family. Rehearsals in the refectory have become traditional, where, under the direction of the choirmaster of the ensemble, Polina Shulepova, the ensembles learned the most complex vocal scores. Under the watchful eye of the artistic director of “Toive” – ​​Igor Arkhipov, masterpiece arrangements were created. The organization of rehearsals and concerts, the working schedule of the ensemble members was on the “shoulders” of Alevtina Voitovich. Every year on Ilyin’s Day (August 2) “Toive” performs at the Ilyinsky churchyard, which attracts pilgrims from different villages and cities. This year the guests from Kuganavolok, Pudozh, Shaly, Pskov, Smolensk, St. Petersburg, and Moscow applauded the Toyivians. The concert at the Ilyinsky churchyard became unforgettable both for the performers themselves and for the audience. This was facilitated by the good weather, the acoustics of the monastery, but also, of course, thunderous applause.

In the village of Varishpelda, where the collective stays annually, the members of the ensemble carry out active volunteer activities: they work in the haymaking, prepare firewood, etc. Of course, this is the time of an unforgettable student vacation – night fires and singing with a guitar. Festival “Vodlovision”, invented by Toyvo members last year, reveals the talents of each of the members of the creative team. The guys themselves compose poems to popular music, write songs, think over the drama of their performance and submit the performance to their colleagues for “judgment”. This year “Vodlovision” took place on July 29th.

Each trip of the ensemble is an event not only for the ensemble, but also for all residents of Vodlozero. “Toive” pleases water lakes with its art at any time and in any weather. Thanks to all those who support national art and traditional culture. Thank you from all of us – the participants and leaders of “Toiva”.

Events of the Year of Science and Technology continue in Russia