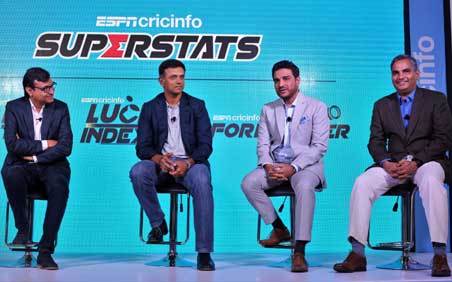 Chennai: In the era of multiple formats and leagues, game of cricket needs to move beyond conventional measurement system such as economy rate, average and strike rate. Keeping this in mind, ESPNcricinfo in partnership with Indian Institute of Technology Madras launches ‘Superstats,’ next level metrics to analyze the game of cricket. Superstats is a combination of stats metrics – Luck Index, Forecaster and Smart Stats that uses Data Science for the first time to give a context to every event in a game and also venture into new territories such as luck and forecasting. Former cricketing legends Rahul Dravid and Sanjay Manjrekar graced the occasion and shared their views on need for next level statistics in the constantly evolving game of cricket.

IIT Madras Researchers and an IIT-M incubated company Gyan Data Pvt. Ltd. working with cricket experts from ESPNcricinfo derived Superstats from ESPNcricinfo’s rich ball-by-ball database which has more than ten years of detailed data, and scientific methods, processes and complex algorithms based on machine learning. The algorithms process accurate, fast data, quantify the impact of luck and analyze the real value of a player’s performance in the game of cricket in real time. This work was led by Prof. Raghunathan Rengaswamy and Prof Mahesh Panchagnula of IIT Madras along with the ESPN team.

Mr. Sambit Bal, Editor-in-chief, ESPNcricinfo and ESPN South Asia, said, “The development of these new metrics filled a long-felt gap in evaluating cricket performances. ESPNcricinfo has always been a pioneer in cricket data analysis and we have combined big data, cricket intelligence, and also data science to produce a set of numbers that will help fans understand and appreciate the game better.”

Speaking about the data analytics behind this initiative, Prof. Raghunathan Rengaswamy, Department of Chemical Engineering, IIT Madras, said, “While there might be many interpretations for luck, these algorithms rationalize and consistently quantify luck events so that a whole tournament with matches that occurred in disparate circumstances could be compared in an ‘apples-to-apples’ fashion.” He further added, “The AI work at IIT Madras is targeted towards several verticals such as fintech, manufacturing, smart city, biological systems engineering, and healthcare. Through this project, we have now forayed into sports analytics as well.”

Rahul Dravid, former Indian captain and head coach for the Under-19, on the role of luck in cricket, said, “Luck played a huge role in my career in 2009. I was on the verge of being dropped and was given an extra opportunity in Mohali against England. I was batting at number 3 and Stuart Broad bounces me. It was a top edge and as soon as I hit it, I was “oh god, I’m out again”. It just falls (short) of Matt Prior and the fine-leg fielder running in. I get a hundred in that game and go on to have a couple of good years, including three hundreds in England”. Commenting on Smart Stats, adding the most important thing going forward, he said, “The critical thing for me are the people who are going to make the best use of these numbers- how you read those numbers, what you get out of these numbers is the key.”

These data science algorithms use forecasting methods that train on past data to uncover trends and patterns during different periods of play and adapt based on actual match data resulting in highly accurate predictive models.

Smart Stats, launched at first as a standalone tool in 2018, is a suite of metrics that help fans judge performances in limited-overs cricket, especially the T20s, in a far more nuanced manner than conventional metrics do. It takes into account the context to every performance, batting and bowling. Context includes pitch conditions, quality of opposition, and match situation – in terms of the pressure on the player. In its new avatar, Smart Stats has added metrics such as Smart Wickets, Player Quality Index and Pressure Indices, to cover all facets of the game.

These metrics have led to sharper story-telling, with some of the strands being:

Ø Most impactful batsman/bowler in a match, in terms of runs scored/saved above par (a cameo of 30 in 10 balls maybe more impactful than 70 off 50 balls)

Ø An alternative scorecard based entirely on smart stats numbers

Ø Best batsman/bowler in each phase (powerplay/death overs), based entirely on smart stats

The Luck Index – So far, the impact of luck on match results have only been spoken about in qualitative terms; a bowler can beat the batsman numerous times but still have zero wickets or an edge from the bat can still concede a boundary. There is no way to assess how lucky a team/player has been. ESPNcricinfo fills this gap with Luck Index, a metrics that measure the quantum of luck by factoring the occurrence of several events including toss, umpiring errors (both DRS and non-DRS decisions), dismissal of a no-ball, dropped catches and more.

The core of the algorithm is in scoring various luck events that occur in a match. Data science algorithms play out different scenarios to evaluate the impact of the luck events. Generalization of the impact of the luck events through an equivalent “runs potential” brings all these events to a common baseline. This makes it possible to answer questions related to luckiest team, luckiest player, alternate points table, head-to-head luck impact and so on in the context of an entire tournament.

Forecaster functions as a prediction tool which provides win probability for the chasing team, likely score for the team that bats first, runs and wicket probability in the following over, for each bowler and so forth.

ESPNcricinfo has always been at the forefront of stats and analyses, but with the amount of data now available at its disposal, ESPNcricinfo takes cricket analytics to the next level, to tell fascinating numbers-driven stories that bring the fans to the heart of the action.