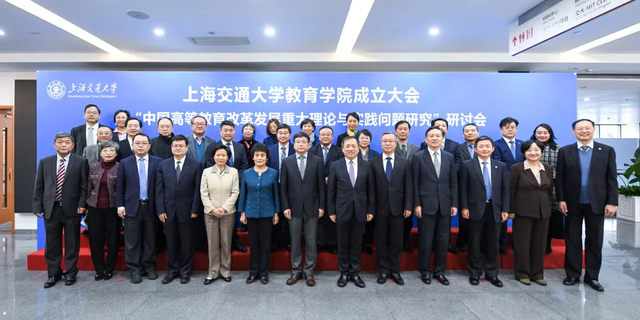 Establishment of School of Education Marks a New Journey of SJTU

On November 23rd, the grand ceremony for the establishment of School of Education, SJTU and the seminar on “Major Theoretical and Practical Issues on Reform and Development of China’s Higher Education” were held at Xuhui Campus. Leaders from Ministry of Education, Municipal city of Shanghai and SJTU participated in the seminar, including Chen Qun, deputy mayor of Shanghai City Government; Lin Huiqing, former vice minister of the Ministry of Education and former vice president of China Association of Higher Education; and Yang Zhenbin, Secretary of the CPC Shanghai Jiao Tong University Committee.

The establishment of School of Education aligns with the requirements of the CPC Central Committee, the State Council and the Shanghai Municipal Party Committee and Municipal Government, which encourages prestigious non-normal universities to put in place a department of education. This motion is also a new exploration in enhancing the education quality made by a domestic comprehensive university.

The ceremony witnessed the establishment of School of Education, SJTU. Prof. Ding Kuiling, vice president of SJTU and CAS academician, was appointed as the honorary president; and experts from government departments, other high institutions and experts in the field of basic education were appointed to join the consulting committee. The ceremony was followed by the seminar on the development strategy of School of Education, on which the members of the consulting committee and relative leaders and experts drew the blueprint for future endeavors.

SKKU: Employment performance of the Department of (Global) Business…