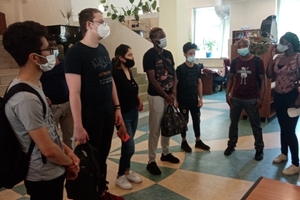 Excursions to the Scientific Library of PetrSU for foreign students

The scientific library of the main building was visited by a group of first-year students of the Medical Institute from Asia, Africa and South America.
The freshmen had a tour of the reading room and the reference and bibliographic department, where it is convenient to prepare for seminars, tests and exams. On the subscription of scientific and fictional literature, students became interested in the works of Russian classics, as well as textbooks and teaching aids on history, psychology, religious studies and philosophy.

In the rare book sector, future doctors touched upon the history of Russian and European books, and also got acquainted with the scientific works of the 19th century on anatomy, biology, chemistry and pharmacology.

The students noted the silence and coolness of the reading rooms of the Main Building and thanked the staff of the Scientific Library for the excursion.

Practice at the Open Air Museum of Stone

PetrSU students are the pride of the university